The incident happened after the minute's silence for Prince Philip

A woman has been arrested outside Windsor Castle after running through the street topless as the Duke of Edinburgh's funeral was taking place. 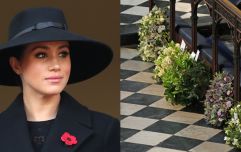 END_OF_DOCUMENT_TOKEN_TO_BE_REPLACED

Apparently she ran through the street shouting "save the planet" just after crowds that had gathered to pay their respects began to clap following a silence in memory of Prince Philip. She then jumped onto a statue of Queen Victoria before being apprehended by police officers at the scene.

Police were then seen retrieving the woman's clothes from nearby.

According to the Sun, the woman broke out from the crowd just as the minute's silence finished. She was dressed only in shorts, sunglasses and a cap.

There was understandably a strong security presence around Windsor as the funeral for Prince Philip took place at St George's Chapel.

Mourners had lined up outside the castle, with some holding Union flags whilst others brought flowers and laid bouquets in memory of the duke.

This incident seems to be the only sign of disruption from the day, which saw the Queen and the royal family say their final goodbyes to the Duke of Edinburgh in a more low-key and simplistic ceremony than would usually be expected to mark the death of a significant royal.

popular
Eddie Hearn: Billy Joe Saunders will be out for a 'long, long time' after injuring eye
This Billy Joe Saunders fan is probably regretting his choice of tattoo
Piers Morgan hits out at decision to replace him with Alastair Campbell on Good Morning Britain
Families will be allowed to hug each other from May 17, says Michael Gove
Andy Burnham says 'Labour should get in touch if they need me' after election result
The JOE Friday Pub Quiz: Week 242
The hardest Marvel Cinematic Universe quiz you'll ever take
You may also like
News
NASA discovers strange radio signal emitting from Venus
Life
Melting glacier reveals cave full of forgotten WW1 artefacts
News
Chocolate orange Yorkie bars are launching in the UK next week
News
Down's syndrome abortion case heads to High Court
News
French trawler rams UK boat in Jersey in post-Brexit fishing row
Next Page