Storey has the chance to claim the overall title on Thursday

Sarah Storey has become Great Britain's joint most successful paralympian after winning her 16th gold medal in the C5 time trial at Tokyo.

This has been the eighth Paralympic Games for the 43-year-old, with her latest win making her tied for the record alongside swimmer Mike Kenny.

Yes yes yes yes! I couldn’t have asked for a better course & prep to make this happen! Thank you to everyone who’s been involved in my time trial project! It’s been years in the making, so it feels extra special this morning 🥇🤩 https://t.co/3PL7UMSZji

END_OF_DOCUMENT_TOKEN_TO_BE_REPLACED

"I never set out on this journey to be Britain's greatest Paralympian but to match the best man and to have more other medals is just a dream come true," said Storey.

Storey has now won 27 medals in total, 16 of them being gold. This puts her in a tie with Olympic legend Mike Kenny.

"It is amazing. It was one of the most perfect days today, the conditions were perfect.

I have my own GIF 🤩 https://t.co/TojXHeSSvl 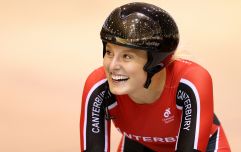 END_OF_DOCUMENT_TOKEN_TO_BE_REPLACED

"The course is super quick. The corners were really grippy and I rode a really good line and carried speed. I got caught up in a bit of traffic at times perhaps as I was going a bit quicker than they had anticipated.

"I am just so chuffed. I have been preparing for this for such a long time. There have been so many parts to it, both my bike and physical preparations."

Storey now has the chance to top the tables in Thursday's road race, which could mean she unseats Kenny and becomes the sole owner of the illustrious title.

popular
Johnny Depp trial: Kate Moss ‘testifying’ in defamation case against Amber Heard, report claims
Ukrainian refugee who ran off with dad finally speaks out and blames man's partner for split
Shocking moment lion rips off man's finger after he sticks his hand into zoo cage
Noel Gallagher left 'covered in blood' after headbutt from Ruben Dias’ dad
Liverpool crowned Premier League champions, but only on aggregate
Topless mum in her undies rescues pet goose from bald eagle in crazy video
Former Man Utd man Marcos Rojo enjoys cigarette and beer on pitch after cup win
You may also like
Sport
Team GB finally takes the gold at Winter Olympics
Sport
15-year-old Kamila Valieva lands historic quadruple jump at Winter Olympics
Sport
The story of Eddie the Eagle: From plastering to the piste
Sport
How to watch the big events at the Winter Olympics
Sport
Piers Morgan is predictably fuming at Simone Biles being crowned athlete of the year
Next Page