END_OF_DOCUMENT_TOKEN_TO_BE_REPLACED

Londoners were urged by police to "run, hide, tell," if they were caught up in the chaos of the evening.

An eyewitness told the BBC that the three men shouted "this is for Allah," before they mounted the pavement and mowed down a group of pedestrians in a white van travelling at 80km/h on London Bridge.

END_OF_DOCUMENT_TOKEN_TO_BE_REPLACED

One man was reportedly stabbed five times in the chest; another was stabbed three times. There are further reports of individuals having their throats cut.

A British Transport Police officer was stabbed in the face as he arrived on the scene.

London Ambulance Service has confirmed this morning that it took 48 people to five different London hospitals.

My statement on the cowardly terrorist attack in London tonight: https://t.co/PaGXogN60N
Please continue to follow @metpoliceuk for updates pic.twitter.com/AcGaju2Svp

END_OF_DOCUMENT_TOKEN_TO_BE_REPLACED

Photographs and video footage appear to show at least one of the suspects with metal canisters strapped to his body - though this 'suicide vest' was later said to be a dummy after being examined by experts. The men were shot dead at 10.16pm; just eight minutes after beginning their attack.

This morning, armed law enforcement officers are sweeping the area as the investigation continues. Counter Terrorism Command stated: "We are reviewing and planning to strengthen our policing stance across London over the forthcoming days, and there will be additional police and officers deployed across the Capital." 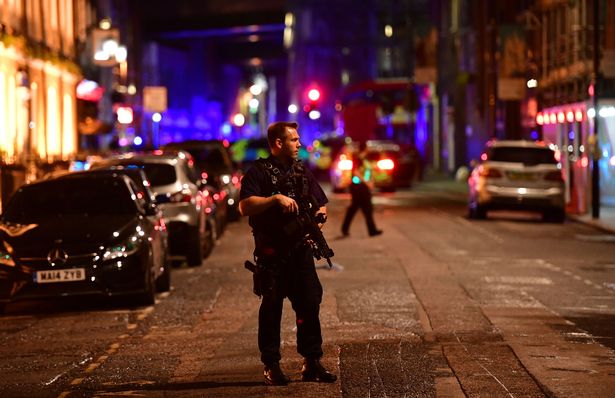 Gerard Vowls was in a pub near London Bridge and said he threw chairs and glasses at the attackers. He told The Guardian: "They kept coming to try to stab me - they were stabbing everyone. Evil, evil people."

Another man, in conversation with DailyMail.com, described how he was in a pub by the Shard: "I was feet away from getting stabbed," he explained. "Saw so many people literally dying. Was in a pub and they were at the door stabbing people."

We have taken 48 patients to hospital following the incident at #LondonBridge https://t.co/hCiKVCBrnb pic.twitter.com/5ipl5vtcTB

Photographer Gabriele Sciotto was watching the Champions League Final nearby. He told BBC News: "I noticed this man with this kind of explosive looking belt on his chest, they were running," he said.

"A police officer was trying to put himself between them and the crowd. After that they were almost coming towards me and I tried to run away."

He continued: "More police came over, I guess they were on radio or something because in around like two or five seconds they shot all the three men down."

Mayor of London Sadiq Khan described the events as a "deliberate and cowardly attack on innocent Londoners and visitors to our city enjoying their Saturday night".

Prime Minister Theresa May said: "Our thoughts are with those who are caught up in these dreadful events.".