There's not much you can do with a penny these days.

They just seem to take up bloody space in your wallet and even shops don't want them.

But novice poker player Andy Jankowski turned 1p into £135,000 by going on an amazing winning streak that saw him win a seat on the World Poker Tour.

He paid his shiny penny to enter an online tournament which eventually saw him qualify for a much richer contest at Lenton's Dusk Til Dawn Casino in Nottingham, according to Metro.

The 44-year-old put nearly 900 competitors to the sword, including a number of professional players.

It seemed like luck was on his side for the IT worker who had quit his job just a month before.

Andy only started playing for fun five years ago in pub games, but he has now won a tournament in Europe's largest poker club against all odds. 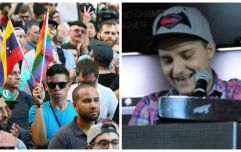 END_OF_DOCUMENT_TOKEN_TO_BE_REPLACED

His pals are pushing him to turn pro and head out to Las Vegas to take on the poker tables of the Sin City super casinos.

But Andy hasn't planned that far ahead and is still figuring out how to spend his staggering winnings.

"I didn’t know what to do with the money when I first won, but now I think most of it will go on property, after I’ve bought a new car."

After winning, he has secured a place in the UK's next big World Poker Tour event in October - back at Dusk Till Dawn - which would normally cost more than £2,000 to enter.

David Allsop, Dusk Till Dawn’s poker league and academy manager, said: ‘It’s massive for the club that one of our home-grown players has won such a major tournament

‘It just goes to show that anyone can win if they give it a good go. There’s no bigger accolade for the game.’

popular
I've watched the Meghan and Harry interview: what the hell are we paying for?
Trisha Goddard applauded for 'one sentence annihilation' of Piers Morgan
Football Index: Gambling Commission "neither confirm nor deny" investigations
Burger King says 'Women Belong In The Kitchen' and people are furious
Meghan and Harry say Palace had 'concerns' over their son's skin tone
GMB guest calls Piers Morgan a 'liar and a disgrace' for Meghan Markle comments
Judge Rinder accuses Meghan Markle of 'brainwashing' Prince Harry
You may also like
Life
How not to suck at poker
Life
Man wins £42,000 at poker tournament then puts it all on black
Fitness & Health
Cristiano Ronaldo talks to JOE about top coaches, training regimes and his fourth Ballon d'Or
Sport
It turns out Manchester United's David De Gea is a secret poker whiz
Sport
We went to Spain to play poker with Neymar
Next Page