For the majority of the past decade, Josh has made some seriously impressive Halloween costumes, incorporating his disability.

Josh says that the nature of his work allows for ideas to flourish.

"I give humorous motivational speeches for a living. So while you are at work or school all day, I am sitting at my desk at home or in an airplane en route to a speech thinking of amputee jokes. Sometimes those ideas become part of a speech. Sometimes they become a costume," he says.

In the past, these costumes have included an iHop sign, a flamingo, a foosball player and the gingerbread man from Shrek. 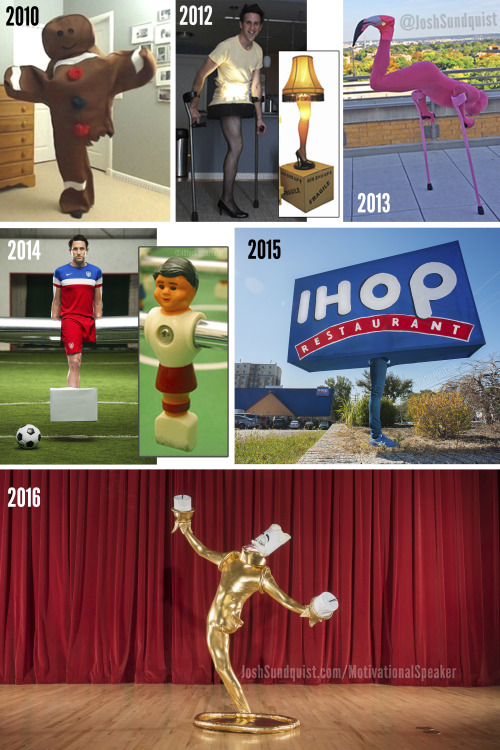 Josh says that he used to be self-conscious of his disability but now embraces it.

"I used to be pretty self-conscious. In high school I wore a prosthesis all the time and didn’t want anyone to find out I was missing a leg. But now I’m more at ease with who I am and what I look like, and I guess with these Halloween costumes you could even say that I celebrate what makes me different. Which may be either weird or refreshing, depending on your perspective," he says. 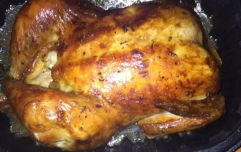 Man gives out rotisserie chickens to trick-or-treaters over Halloween

END_OF_DOCUMENT_TOKEN_TO_BE_REPLACED

All costumes are constructed by Josh and his assistant.

"They are a joint taskforce creation between my assistant Lisa and me. We toss around ideas for a few months about different costumes and how they could be constructed. She does all the heavy crafting. She’s a licensed carpenter, among many other talents. They are built primarily from materials purchased at craft-supply stores and they take weeks of trial and error to construct," writes Josh.

popular
Roy Keane and Jamie Redknapp in heated row over Tottenham
Lady Gaga to pay her dogwalker's £70k medical bills after he was shot
The JOE Friday Pub Quiz: Week 232
Indian man killed by rooster in illegal cockfight
19 year old student died from sepsis after calling GP 25 times for appointment
QUIZ: Can you identify these cities highlighted on a map?
QUIZ: Name these 50 Premier League players from the 2000s - #1
You may also like
Entertainment
These are some of the most haunted objects in the world
Entertainment
This is the most haunted pub in Britain
Quiz
QUIZ: Can you guess the horror movie from just a single image?
Life
What your 2019 Halloween costume says about you
Life
8 spooky costume ideas guaranteed to impress this Halloween
Next Page