He said farewell on camera.

As much as we all talk about it, when it comes to your final minutes in life it's hard to know what you'd do. 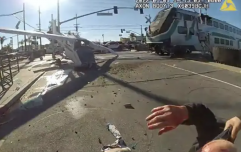 END_OF_DOCUMENT_TOKEN_TO_BE_REPLACED

Many say they want to die in the presence of their partner or extended family, but when it comes to that point none of us can predict how and when death will happen.

One man was left stranded, knocked off his motorbike after an awful accident and was forced to record his last minutes on his phone.

The 41-year-old Kevin Diepenbrock was riding his motorbike along the border of North Tennesee and Carolina when suddenly, his friend, Phillip Polito braked hard.

29-year-old Philip reportedly braked without warning which caused Kevin to collide with him, sending the pair of friends off an embankment which was over 50m high.

Unfortunately, Philip did not survive the crash but Kevin was left alive and unable to move at the bottom of the embankment, believing that he was going to die alone.

Unsure of what to do before he passed away, Kevin decided to say his final goodbyes to everyone he knew and loved in case he didn't get a chance to do it.

Lying down in the leaves with a bloodied face and tears in his eyes, Kevin bids farewell.

"Hey everybody, I f*cked up, that’s all I can really say. At about 10.30 this morning. Been laying here ever since. About 50ft down in the ravine.

"I just wanted to say I love you guys. Sorry I was being stupid, but you know that’s what I do." 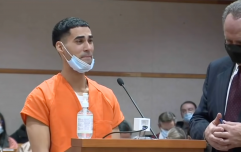 END_OF_DOCUMENT_TOKEN_TO_BE_REPLACED

Eventually, Kevin's cries for help were heard by a passing couple and he was taken to hospital 27 hours after the initial crash.

It's reported that Kevin has broken ribs, damaged his lungs and spinal fractures.

popular
Teen brothers arrested for 'beating stepdad to death after he abused their half sister'
Johnny Knoxville left with brain damage after bull stunt in Jackass Forever
Chelsea have £3million bid for their own player rejected
The Beast opens up about mental health after storming off The Chase
Moment thug kidnaps teenage ex in horrifying ordeal that left her unable to walk or talk
Coronation Street star left homeless after sharing anti-vax views
Martin Lewis issues urgent advice for households ahead of energy price hike
You may also like
Life
Drivers could be fined thousands for not keeping inside of their cars clean
Life
Armoured truck spills money across motorway as drivers go wild in cash grab
News
Plane flying ‘will you marry me’ banner crashes, killing passenger
Tech
Mark Zuckerberg slammed for his apology on social media blackout
Sport
Verstappen and Hamilton take each other out in Monza GP after dangerous collision
Next Page