Theresa May announced that she will offer MPs a vote on the whether to hold a second referendum on Britain's membership of the EU, as she revealed the terms of her new Brexit deal on Monday.

In a speech, the prime minister said her new Brexit bill will include a requirement to hold a vote on whether or not to have a second referendum if it is passed.

May also warned MPs that if they failed to pass her bill then they would be rejecting Brexit leaving it "dead in the water", likely triggering another public ballot on Brexit or a general election.

Turning to the impact the Brexit deadlock was having on British politics, she described it as "corrosive". "We are making a new offer to find common ground in parliament," she added. "That is the only way to deliver Brexit."


The announcement follows a prolonged period of cross-party negotiations following her last withdrawal agreement being rejected in March. Over the next two weeks, the government will look to persuade MPs across parliament to vote for the deal ahead of the vote. 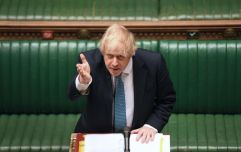 END_OF_DOCUMENT_TOKEN_TO_BE_REPLACED

Among the changes announced to her previous deal are safeguards on workers rights to remain "as good as or better” than EU standards, common rules for food and agricultural goods, a legal obligation to seek alternative arrangements to the backstop by 2020 and further guarantees on environmental issues.

Parliament will also be able to choose between the government's position on standards for good, such as making new independent trade deals, or whether to back Labour’s proposals for remaining in the customs union.


popular
QUIZ: How did these Game of Thrones characters die?
The JOE Friday Pub Quiz: Week 194
QUIZ: Can you complete the Arctic Monkeys song lyrics?
QUIZ: Name the 25 youngest scorers in Premier League history
QUIZ: Identify the brand from just its slogan
Anthony Joshua's team addresses fighter's alleged racist remark
Can you identify the brand just from its logo?

You may also like
Quiz
The JOE Friday Pub Quiz: Week 194
News
American policeman speaks out against aggressive cops
News
Some people are acting like there isn't a pandemic
Sport
All remaining Premier League games will be televised
News
The bereaved families fighting for justice for coronavirus victims
Next Page