She also suggested that remain could still be an option

Theresa May reiterated that she will not delay Brexit beyond June 30 in her speech on Wednesday night.

The prime minister explained that she had written to Donald Tusk, the EU's chief negotiator, to request a short extension until the end of June in order to give members of parliament enough time to decide what they want as clock runs down on the UK to sort itself out before it leaves the EU.

"We asked you the question already and you gave us your answer," May said, reiterating her commitment to deliver Brexit.

May then blamed MPs for creating the need to request this extension, after they rejected her deal in the house of commons twice already.

There is no guarantee that the EU will grant this extension, as all 27 other MPs have to agree to it.


While dismissing the idea that a second referendum could be given to the British people, she appeared to suggest that remaining in the EU could still be a possibility, when listing the options that MPs could vote for: “Do MPs want leave with the deal, leave without a deal or not leave at all, it’s time for MPs to decide." 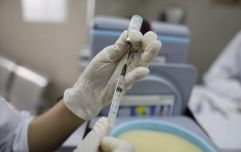 END_OF_DOCUMENT_TOKEN_TO_BE_REPLACED

However, it's more like that the intention behind this was to blackmail MPs into voting her deal through. You wouldn't want to betray what your constituents, would you?

She said that a 'people's vote' is not what the people want, nor what she wants. She claimed that the general public want parliament to 'get on with it', and pledged to do so.

"You are tired of MPs talking about nothing else but Brexit when you have real concerns about schools, the NHS, knife crime"

In an address to the nation, UK PM Theresa May tells the public she is "on their side" over #Brexit delays https://t.co/CJsmZ1OPT3 pic.twitter.com/lKxk5JxjAY


popular
Nando's is coming back this week
OH WHAT A NIGHT: When Manchester United clinched the Treble, by the fans who were there
Piers Morgan calls out Dominic Cummings for eyesight claims in press conference
QUIZ: Who said it - Prince Philip or Michael Scott?
The JOE Friday Pub Quiz: Week 192
QUIZ: Can you guess the Leonardo DiCaprio movie from a single image?
The hardest brand logo quiz you'll ever take

You may also like
Politics
Piers Morgan calls out Dominic Cummings for eyesight claims in press conference
Politics
Dominic Cummings and Boris Johnson are laughing at you
Comment
COMMENT: If only the Government shielded our elderly like they shield Dominic Cummings
Politics
Would Obama handle coronavirus better than Trump?
Politics
Peter Hitchens: If the pubs open, I'll go tomorrow
Next Page