Gangs and drugs were named by the PM as associated with the issue, which has prompted calls for a national emergency to be declared

Austerity's impact on the number of police officers is not responsible for the rising problem of knife attacks in the UK, prime minister Theresa May has claimed.

Questions over government policy have only grown in recent months with Jodie Chesney and Yousef Ghaleb Makki, both 17, among the latest teenagers stabbed to death, this time in London and Manchester, respectively.

Speaking in Salisbury on the anniversary of the Novichock poisoning, May said: "If you look at the figures, you'll see that there's no correlation between certain crimes and police numbers.

"What matters is that police are responding to these criminal acts when they take place, that people are brought to justice but what also matters is as a government we look at the issues that underpin this use of knives and that we act on those.


Labour claim that 20,000 police officers have been cut from forces since the Conservatives were elected in 2010, with Channel 4's Dispatches programme finding a 77 percent rise in reported homicides involving a knife or sharp instrument by under-18s between 2016 and 2018. 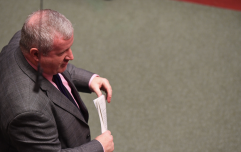 Ian Blackford excoriates Theresa May at her penultimate PMQs

END_OF_DOCUMENT_TOKEN_TO_BE_REPLACED

And the government has been accused of responding slowly, home secretary Sajid Javid coming out on Monday to call for authorities to "unite" in tackling the problem.

"Young people are being murdered across the country and it can't go on," said Javid. "It is vital that we unite to stop this senseless violence."

The Metropolitan Police have stated that their own efforts to increase the number of officers on patrol over the weekend "made a difference" thanks to increased "visibility" across the capital.

The force's assistant commissioner, Graham McNulty, said: "In advance of the weekend just passed, we had arranged for more officers from our Violent Crime Taskforce to be on duty and we have extended their shifts to raise visibility across London.

"The increased police presence has made a difference, with officers conducting more than 2,500 stop and searches in the last three days alone."

You may also like
Politics
This is how much Theresa May could earn now she’s no longer prime minister
Politics
Jeremy Corbyn and Theresa May accuse each other of leading racist parties at PMQs
Politics
Simon Brodkin: How I fired Theresa May
Politics
QUIZ: Can you identify the MP from the constituency?
News
Donald Trump says NHS is 'on the table' in a trade deal with the UK
Next Page