The UK could be finally getting rental e-scooters

Several years after they made their debut in cities across the US and mainland Europe, E-scooters for rent could be coming to our green and pleasant shores.

The government has tabled legislations that would allow E-scooters to be used and operated on British roads. At present, e-scooters are defined as a “motor vehicle” in the Road Traffic Act 1988 and the use of e-scooters is not allowed on public roads or on pavements.

According to official parliament records:

"The instrument would enable trials of e-scooters on public roads, by defining the characteristics of e-scooters taking part in the trials and exempting them from certain requirements. For example:

Opening up these trials would clear the way for companies like Bird, Lime and Uber to expand their operations and potentially start renting out scooters as they currently do in cities like LA, Milan and Vienna. 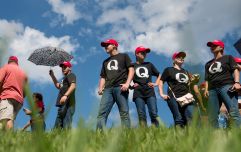 END_OF_DOCUMENT_TOKEN_TO_BE_REPLACED

Currently the only place where rental E-scooters are legal is the former Olympic park in Stratford as it's private land and they don't work if you take them beyond the perimeter.

E-Scooter company Bird, who operate the vehicles in the Olympic park said:"In the coming weeks, we look forward to launching our industry-leading scooters in cities across the UK. We’ll share more information on dates and locations as the moment nears. For the time being, we’d simply like to thank government leaders for taking this progressive step towards sustainable personal mobility, along with our Bird team members and partners in the UK who have worked tirelessly to get us to this point."

Earlier this month, an NHS worker from Bristol was arrested after using an E-scooter in Bristol.

popular
Roy Keane and Jamie Redknapp in heated row over Tottenham
Lady Gaga to pay her dogwalker's £70k medical bills after he was shot
Lee Mason removed from Sheffield Utd vs Liverpool game with injury
The JOE Friday Pub Quiz: Week 232
19 year old student died from sepsis after calling GP 25 times for appointment
Indian man killed by rooster in illegal cockfight
QUIZ: Can you identify these cities highlighted on a map?
You may also like
Tech
Twitter introduces its own form of stories with new feature Fleets
Tech
WhatsApp is introducing messages which disappear
Tech
There's another major setback for Huawei smartphones
Gaming
John Wick to be made into video game with voices provided by the cast
Entertainment
Netflix to trial new feature that everyone will want to try
Next Page