It's the news that the free world has been waiting for

Dwayne 'The Rock' Johnson has confirmed that he would be prepared to run for president if people want him to. It's after a recent poll found that 46% of American would support The Rock if he ran for office. 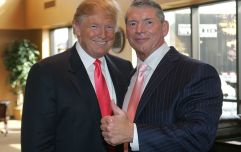 END_OF_DOCUMENT_TOKEN_TO_BE_REPLACED

In an Instagram post referencing the poll findings, Johnson wrote: ‘I don’t think our Founding Fathers EVER envisioned a six-four, bald, tattooed, half-Black, half-Samoan, tequila drinking, pick up truck driving, fanny pack-wearing guy joining their club – but if it ever happens it’d be my honor to serve you, the people.’

He then received even more support in the comments.

Now it seems that he's fully committed to the idea. In an interview for Sunday Today, Johnson was asked whether politics was still something that he was interested in pursuing. He replied: "So, I do have that goal to unite our country and I also feel that if this is what the people want, then I will do that. I am passionate that our country is united. A united country, as we know, it when it’s at its strongest and I want to see that for our country."

As if Johnson's campaign didn't appear to have enough public support, he's also got the backing of fellow ex-wrestler and longtime friend The Undertaker, who's real name is Mark Calaway.

Calaway told TMZ Sports in February: ‘That man works his tail off and he dives in wholeheartedly in everything that he does and if he gets his mindset that he wants to make a run at politics, ya know what? I think he’ll do it.

"He’s so charming, he’s so witty – I think he can be the uniter that people are looking for."

WWE champion Bobby Lashley has also come out in support of a Rock 2024 presidential campaign.

Honestly, we're at the stage now where the Rock in the White House would seem normal considering what the last five years have thrown our way.