The stepfather fought through tears to recall the painful story

A distraught father has spoken of the harrowing moment when he learned that his daughter was one of the victims of the recent mass shooting at a Texas school. 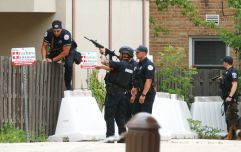 END_OF_DOCUMENT_TOKEN_TO_BE_REPLACED

18-year-old Salvador Ramos shot and killed 19 students and two teachers after he opened fire at Robb Elementary School in Uvalde, Texas, yesterday morning. The incident has already been labelled as one of the worst school shootings in American history.

Among the incident's many young victims was 10-year-old Amerie Jo Garza who was reportedly shot whilst attempting to call 911 following Ramos' attack.

The brave young girl has since been labeled a hero for her valiant attempts to alert the authorities - and now her stepfather Angel Garza has spoken publicly about how he learned that she tragically did not survive Ramos' rampage.

"She was just so scared of strangers... she would lock the door when I would step out to put gas in the car. This is literally her worst fear and she was just trying to help everyone."

The full conversation can be viewed below:

Garza continued, explaining how he discovered that his stepdaughter was one of Ramos' victims.

END_OF_DOCUMENT_TOKEN_TO_BE_REPLACED

"I'm a med-aid, so when I arrived on the scene they still had kids inside. They started bringing the kids out," he began.

"One little girl was just covered in blood, head to toe.

"I thought she was injured. I asked her what was wrong, she said she was okay. She was hysterical saying they shot her best friend, that they killed her best friend and she's not breathing and she was trying to call the cops."

It's here where Garza struggles to recount the story, managing "I asked the little girl the name and she said Amerie," before breaking down into tears.

Amerie had won an award that morning for the school's A-B Honor Roll mere hours before the shooting took place.

As covered on The Independent, the child's grandmother Berlinda Irene Arreola spoke of the bright future that laid ahead of Amerie.

“She was super-outgoing. She had a generous heart. She was always there to lend anybody a helping hand. She was very quick to be a teacher’s pet.

"She was very smart and she was looking forward to making a life for herself.”

Arreola added: “My granddaughter was shot and killed for trying to call 911, she died a hero trying to get help for her and her fellow classmates."

popular
Brit on holiday beaten with a brick by gang before being thrown in the sea unconscious
Men with ‘very large penises’ wanted for new documentary
Premier League player arrested on suspicion of rape facing two more allegations
Dad who ran off with Ukrainian refugee says couple are doing 'brilliantly' - but he can't see his kids
Teens are turning up to watch Minions in suits - and why cinemas have been forced to ban them
British schoolboy breaks internet after attending prom in sequined tuxedo ballgown
July 4 shooter: Chicago suspect fled the scene in women’s clothes and planned attack for weeks, police say
You may also like
Social Media
Copenhagen: Chilling video shows shopping mall gunman who killed three in random attack
Life
Subway worker shot dead for putting too much mayo on sandwich
News
More than 700 people shot dead in the US since the Texas school shooting
News
10-year-old Florida student arrested for 'threatening mass shooting' at school over text
News
Woman kills man who opened fire on a birthday party in Virginia
Next Page