Super Mario Run will launch on iPhone and iPad before Christmas

It's just a month away.

Super Mario Run will launch on iOS on December 15, just in time for the Grinches among you to ignore Christmas.

END_OF_DOCUMENT_TOKEN_TO_BE_REPLACED

News of the game received a warm reception at Apple's iPhone 7 launch event in September, and it will be available on both iPhone and iPad from the middle of next month.

The game will be initially free to download, BUT... users will then have to pay £7.99 to unlock the full game.

That's how they get ya.

That being said, we'd pretty happily pay a tenner for the hours of fun that this will bring.

Not convinced by the video above? Here's a bit more detail about the sort of thing we can expect Nintendo to have in store with their upcoming release.

It's going to be a busy few months for the company, whose new hybrid console the Nintendo Switch is due to drop in March next year. 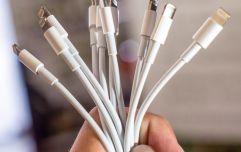 END_OF_DOCUMENT_TOKEN_TO_BE_REPLACED

So that gives you three solid months of Super Mario Run before the release of a new console on which you'll surely be able to access another Mario Bros title, even if it's not quite ready upon launch.

popular
Patrice Evra slams Jamie Carragher for criticising Cristiano Ronaldo
Machine Gun Kelly stabbed himself in front of Megan Fox to look cool
Horrifying footage shows cop fatally shoot man in wheelchair 9 times
Arthur Labinjo-Hughes: Dad and partner found guilty of killing boy who was tortured and starved
Prince Andrew 'flew with sex slave' who was 'frozen with fear', court told
Arsenal score bizarre goal against Man Utd with David de Gea down injured
Frank Lampard admits he 'felt terrible' over comments he made about Paul Pogba
You may also like
Tech
Woman shares iPhone feature that lets you listen to conversations from 15 metres away
Tech
WhatsApp to be blocked on millions of phones from today
News
Apple to start scanning people's messages and photos to find child abuse
News
iPhone users could get £750 compensation from Google for data tracking
Life
Apple to unveil 217 new emojis, including gender neutral faces
Next Page