As Prince Harry and Meghan Markle's wedding draws nearer, royal watchers are poring over the details of the big day.

We have a few details to go on, including the invitations that the couple have sent to their guests.

Invitations to the wedding of Prince Harry and Ms. Meghan Markle, which will take place at Windsor Castle on May 19, have been issued in the name of His Royal Highness The Prince of Wales. Guests have been invited to the service at St George's Chapel and to the lunchtime reception at St George's Hall, which is being given by Her Majesty The Queen. The invitations follow many years of Royal tradition and have been made by @barnard_and_westwood. They feature the Three-Feathered Badge of the Prince of Wales printed in gold ink. ? @pa

END_OF_DOCUMENT_TOKEN_TO_BE_REPLACED

It's simple and elegant, stating that "His Royal Highness The Prince of Wales KG KT requests the pleasure of the company of (name) at the marriage of His Royal Highness Prince Henry of Wales with Ms Meghan Markle," at the nuptials at St George's Chapel in Windsor Castle on Saturday 19 May.

Some very eagle-eyed royal observers have spotted that the wording is very slightly different to that in the wedding invitations sent out for Prince William and Kate Middleton's big day in 2011.

Their invites referred to Kate as "Miss Catherine Middleton" while Meghan is "Ms Meghan Markle".

The Ms, as opposed to Miss, nods at Meghan's previous marriage. 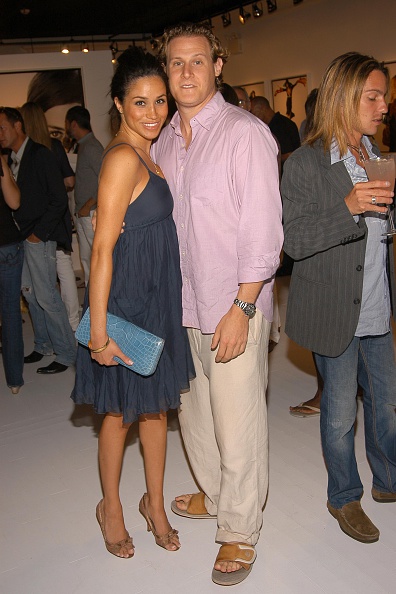 The actress was married to producer Trevor Engelson between 2011 and 2013.

END_OF_DOCUMENT_TOKEN_TO_BE_REPLACED

"The wording referring to Meghan on the wedding invitations is a first but this is a unique wedding," royal expert Richard Fitzwilliams told The Independent.

"Ms is the correct way to refer to a divorced woman before either her birth name or married name."

It wasn't meant as a dig at the bride-to-be, though.

"It is also appropriate as Meghan is a feminist," Richard continued.

"The use of Ms is a contemporary way of avoiding using Mrs or Miss and I think it certain that this is also something Meghan would have approved of."

popular
Brit on holiday beaten with a brick by gang before being thrown in the sea unconscious
Towie’s Yazmin Oukhellou and Jake McLean had ‘furious row in Turkish club’ minutes before horror crash, report claims
July 4 shooter: Chicago suspect fled the scene in women’s clothes and planned attack for weeks, police say
Premier League player arrested on suspicion of rape facing two more allegations
British schoolboy breaks internet after attending prom in sequined tuxedo ballgown
Dad who ran off with Ukrainian refugee says couple are doing 'brilliantly' - but he can't see his kids
Horrific moment fire dancer engulfed by flames after performance goes wrong in front of tourists
You may also like
Life
You might be saying Prince Harry and Meghan Markle's daughter's name all wrong
Music
Why did Serbia sing about Meghan Markle at Eurovision 2022?
Entertainment
Harry and Meghan call out Spotify over Joe Rogan Covid misinformation row
News
Meghan Markle 'more influential than the Queen' claims research
News
Prince Harry ‘fears family not safe in UK’ as he files claim over police protection
Next Page