The actor has been accused of rape

Steven Seagal walked out of a BBC Newsnight interview last night after being question over sexual assault allegations made against him.

Host Kirsty Wark asked him about the multiple misconduct and assault allegations he faces, including from Jenny McCarthy and Portia de Rossi.

"In terms of your life in America, you have been very much caught up in all the allegations of sexual harassment. You had a rape allegation against you and I wonder how you deal with all that?" Wark asked.

This is the moment Steven Seagal walks out on a #newsnight interview over questioning about #metoo allegations, which he denies.@sseagalofficial | @KirstyWark | @BBCTwo | #newsnight pic.twitter.com/Lr6mE3th4F

But before she had finished her question, Seagal took off his earpiece and walked offscreen, with the camera then cutting back to the studio.

"Hello, Steven Seagal?" Wark asked, then adding: "Steven Seagal there, and of course though he didn't respond there, he has said previously that he denies any allegation made against him."

The 66-year-old American actor has been accused of raping then 18-year-old actress Regina Simons in 1993 when she was an extra on his film On Deadly Ground. As the statue of limitations for the crime passed in 1999 he has not been charged over the allegation. 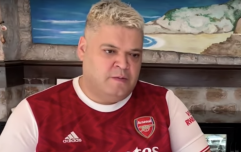 END_OF_DOCUMENT_TOKEN_TO_BE_REPLACED

Simons told TheWrap: “He took me into this room and then just closed the door and started kissing me.

"He then took my clothes off and before I knew it he was on top of me, raping me.

"The only way I’m able to describe it is I literally felt like I left my body.

"I think because of the situation I was completely caught off guard.

"Tears were coming down my face and I know that it hurt. He was three times my size."

British actor Rachel Grant has also said that Seagal assaulted her at a film rehearsal in 2002 and Portia de Rossi claims that he exposed himself to her during a private audition. Seagal denies all allegations against him.

Seagal had been appearing on Newsnight to talk about his role as as Russian Special Envoy to the US. Explaining why he had taken on the job, he said: “I love America, I love Russia, I am trying very hard to work where we can have more meaningful conversations, strive to make better relations.”

You may also like
Politics
There is currently no evidence to show an increase in suicides during lockdown
Sport
An ode to Diego Maradona, from an Englishman
Sport
Diego Maradona: A remarkable career in pictures
News
Meghan Markle reveals that she suffered a miscarriage during the summer
Sport
Arsenal and Leeds United condemn online abuse of Nicolas Pepe and Ezgjan Alioski
Next Page