Following the hung parliament of the election, one of the first things to be affected were the Sterling exchange rates, which went into a sudden and severe plunge as the results of the vote became clearer. 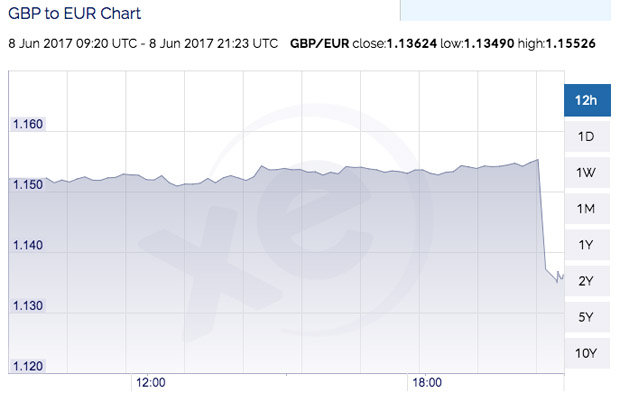 END_OF_DOCUMENT_TOKEN_TO_BE_REPLACED

While the significant 2% drop will be felt for days to come, it does appear that it will plateau out in the coming days until an actual decision is made.

With many calling for May's resignation, the potential for a softer-than-expected Brexit could lead to a more stable pricing for GBP in the not-too-distant future.

popular
Groom slammed for going to own wedding to bride, 16, in jeans and t-shirt
The JOE Friday Pub Quiz: Week 295
Topless mum in her undies rescues pet goose from bald eagle in crazy video
Confusion as woman appears to fart during viral clip of Depp-Heard trial
Woman reveals cruel reason date dumped her after they had sex for the first time
Kylian Mbappe asked PSG to sell Neymar and replace him with Ousmane Dembele
Why Aston Villa could pocket £12m for helping Liverpool win Premier League title
You may also like
News
Beergate: Were students who took Starmer curry photograph at a gathering themselves?
News
Australian politician wants paedophiles to be chemically castrated
News
Keir Starmer to resign as Labour leader if curry night broke lockdown rules
Entertainment
Gogglebox star Mary faces calls to be removed from show over Boris Johnson comments
News
Scottish Tories spent thousands on adverts targeting English voters
Next Page