The flyer called for the physical assault of Irish, Scottish and Muslim people.

An email promoting violence against "Fenians" appears to have been sent to several members of the Scottish Parliament.

One such message was received by Glaswegian MSP and deputy leader of the Scottish National Party, James Dornan who shared it via Twitter.

The message reads: "On 1st May 2018 we urge all Protestants to stand up and put all Fenians back in their place as it is time for our religion to fight the plastic Irish in our Country.

"These Fenian bastards have infiltrated our Society, our Councils and our Government as well as high ranking officials in Law."

The email went on to lay out a point system, which urged people to punch, stab or shoot anyone who is Irish, a Scottish Nationalist or Muslim: 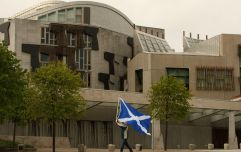 How well do English people know their neighbours?

END_OF_DOCUMENT_TOKEN_TO_BE_REPLACED

"300 points if you put one in hospital by stabbing.

"5000 points if you burn down a chapel or place they congregate.

"50000 if you get a Fenian, Scottish Nationalist and Muslim (Triple Bill)."

Emblazoned with a large Union Jack flag at the end of the page, the email concluded, "We will be mastered by no Fenian bastard," before it concluded by saying, "Fuck the Pope."

So I’ve just been emailed this. Any others of my colleagues received it? pic.twitter.com/WIiaydFjzp

According to Dornan, the message was sent into his parliamentary email address and he confirmed via his page that it had been reported to local police.

"Don’t worry about it," he went on to say. "It’s just stupid Wee keyboard warriors who are always tougher from the safety of their bedrooms. Nothing is going to happen. Trust me."

A member of Police Scotland responded to the racist flyer, saying: "We have received a complaint regarding an offensive communication and our enquiries are ongoing."

You may also like
Life
Do English people know where the Scottish border is?
Politics
Brexit or Independence? How will Glasgow vote in the General Election?
Life
The man who makes Irn-Bru doughnuts
Entertainment
The Ultimate Guide to Scottish Patter
Sport
Scotland defeat Ireland in final of darts World Cup
Next Page