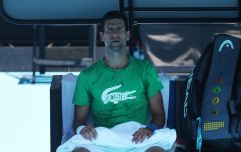 END_OF_DOCUMENT_TOKEN_TO_BE_REPLACED

The world No.1 complained vehemently that someone was toking a joint during his Rogers Cup semi final match with Jeremy Chardy on Saturday.

"Someone is getting high, I can smell it. I am getting dizzy," Djokovic told the umpire in his semi-final match against Jeremy Chardy (which he won), according to the Telegraph.

Afterwards he told reporters: "You can't believe how bad it was. Whoever it is, I hope he doesn't come back tomorrow. He's probably on the seventh sky somewhere."

It's was the second time that Djokovic complained a spectator was enjoying a sly reefer on court, after sniffing it out during his and Janko Tipsarevic's doubles loss to Edouard Roger-Vasselin.

We don't know if the mystery marijuana fan was back at Sunday's final, but the Serb ended up losing to Andy Murray 6-4, 4-6, 6-3, with the Brit ending an eight-game hoodoo in the process.

Everyone knows what to do at Wimbledon next year then...