As if any more proof were needed to back-up the number one parenting truism - you really can't take your eye off kids for a minute.

One poor mother recently discovered this to her cost when her six-year-old girl felt the sudden urge to add to her Pokemon collection earlier this month. However little Ashlynd Howell from Arkansas, in the US, wasn’t content with merely pestering her parents or writing to Santa. 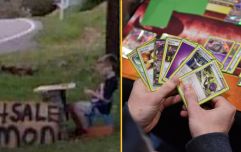 END_OF_DOCUMENT_TOKEN_TO_BE_REPLACED

Instead she opted for direct action.

While her mum Bethany was napping on the sofa, Ashlynd used her parent's hand to unlock her phone using Touch ID. She then placed orders for over £200 worth of Pokemon gear.

“After Ashlynd’s parents received 13 order confirmations for Pokemon items, they initially thought they’d been hacked,” according to the Wall Street Journal.

The parents then considered that their daughter had maybe made the purchases by accident. However she soon fessed up.

Ashlynd told her parents: “No, Mommy, I was shopping. But don’t worry—everything that I ordered is coming straight to the house.”

When her parents tried to return the items they discovered they could only send back four of the 13. But how can you remain mad when your child has shown such innate genius to beat the system? So they used the rest as Christmas gifts and told their daughter Santa had seen her Amazon wish list.

popular
How did Brian Laundrie’s parents find his remains in a few hours?
St James' Park to get new name under Newcastle new owners
Real life Squid Game coming to UK and you have to sign a 'medical disclosure' to play
Taliban 'behead junior volleyball player and post photos of her head on social media', report says
The JOE Friday Pub Quiz: Week 266
Alec Baldwin asked 'why was I handed a loaded gun?' after fatal on-set shooting
Patrice Evra was "ashamed to admit" he was sexually abused
You may also like
Entertainment
A salute to Ash Ketchum, a sports hero we can be proud of
Gaming
QUIZ: Name these Game Boy games from just a single screenshot
Gaming
The release date for Pokemon Sword and Shield has been announced
Gaming
The new Pokémon game will monitor your sleep, and and train your Pokémon based on your sleep pattern
Film
Ryan Reynolds 'leaks' Detective Pikachu movie in amazing troll move
Next Page