The bank is working with police

YouTube singing sisters Flo and Joan have received death threats following their leading role in a series of Nationwide adverts.

The bank has revealed that the duo, whose real names are Nicola and Rosie Dempsey, have been repeatedly abused on social media and it's now been reported to the police.

"The huge amount of likes and shares have been great. But then there are others who have chosen to post the most vile, abusive and misogynistic comments about the duo.

"It is not just our Flo & Joan adverts that generate these comments, it is also our adverts that feature people of different colours, backgrounds and perceived sexuality, which attract the most criticism.

"That's why it is important to call out those persistent offenders who put out vile comments on a regular basis and who should really know better." 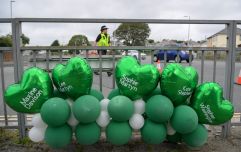 END_OF_DOCUMENT_TOKEN_TO_BE_REPLACED

The bank has also said they are working with the Metropolitan Police "to look at the true scale of this worrying trend to spread hate from behind a keyboard and attempt to create a solution to tackle the issue."

The Dempsey sisters gained notoriety through their viral "The 2016 Song."

popular
Robinho to begin prison sentence after rape conviction appeal is rejected
Man kept as slave in shed for 40 years on Wales caravan park
Barcelona willing to pay £45m for Brazilian 15-year-old
A definitive ranking of every swear word from worst to best
Marvel actor Gaspard Ulliel passes away aged 37 in ski accident
British Airways cancels flights to US after 5G concerns
'My cat is so huge everyone thinks he's a dog - and he's still growing'
You may also like
Life
‘Not all incels are violent’: Meet the people helping woman-haters see sense
Fitness & Health
Britain's strongest women on sexist abuse, stereotypes and competing with Eddie Hall
Fitness & Health
Female personal trainer shares the creepy messages she receives from men on social media
News
'Societal change that needs to happen': What men need to know about sexual harassment
Comment
If Boris Johnson wants to address 'casual everyday sexism' he should start with himself
Next Page