Wrestlemania 32 is right around the corner and WWE is pulling out all the stops.

Boasting a card full of familiar faces for Attitude Era fans (HHH is wrestling in the main event. No, really, in 2016. It's going to be great) along with the next generation of stars, 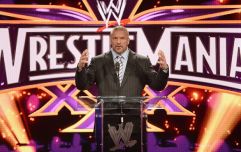 END_OF_DOCUMENT_TOKEN_TO_BE_REPLACED

The co-main event of this year's Wrestlemania will see Shane McMahon face off against The Undertaker in a special Hell in a Cell match off.

There's control of Monday night RAW and The Undertaker's career at stake, so things have been getting rather heated between the pair in recent weeks.

It all came to a glorious head in this week's "go home" edition of Monday night RAW where Shane McMahon managed to put the Undertaker through the announce table.

Wrestlemania 32 is going to be rather special folks.

Wrestlemania 32 will be in Arlington, Texas this year on April 3 with Roman Reigns v Triple H as the main event. It will be available to watch using a free monthly trial on the WWE Network.

popular
Man poos out of penis and ejaculates from bum due to health condition
Brothers stabbed younger sibling to death through car window in frenzied 30-second attack
Insulate Britain protestor storms off GMB after clash with Richard Madeley
Jessica Rabbit has been given a 'politically correct makeover' and fans are fuming
Premier League clubs agree on calendar ahead of 2022 World Cup
Applications to appear on the next season of Gogglebox are now OPEN
Vegan Bake Off contestant apologises after making non-vegan cake in first week
You may also like
Sport
CM Punk makes sensational return to wrestling after seven year absence
Fitness & Health
Bianca Belair is probably twice as strong as you. No, really
Entertainment
Dwayne 'The Rock' Johnson says gruesome injury is the reason why he doesn't have six pack abs
Fitness & Health
WWE superstar explains why he eats breakfast cereal after a workout
Entertainment
WWE star Drew McIntyre hits back at claims that wrestling is 'fake' and 'scripted'
Next Page