Several children in hospital after ceiling collapse at London school

Several children were rushed to hospital after a ceiling collapsed at a school in Dulwich on Monday. 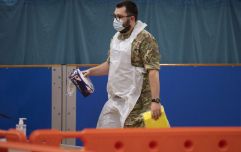 END_OF_DOCUMENT_TOKEN_TO_BE_REPLACED

The fire brigade was called to Rosemead Preparatory School and Nursery in the south London village around 9.22am after a ceiling collapsed on the second floor.

London Fire Brigade said a number of children were taken to hospital by London ambulance crews and a number of people were treated at the scene for minor injuries.

It added that a specialist Urban Search and Rescue team and equipment were used to confirm the building was at no further risk of collapse.

The school issued a statement saying they would look into the cause of the collapse, and added that the "school day is continuing as usual".

The local Labour MP for Dulwich and neighbouring Southwark area of West Norwood, Helen Hayes, gave her best wishes to those affected and thanked the emergency services for their swift action.

Very concerned to hear of the collapse of a ceiling at Rosemead School this morning. My thoughts are with the children, staff and parents. I hope no-one is seriously injured. I’ve contacted the school to offer my support. My thanks to the emergency services who attended the scene https://t.co/tZFEKiTZIf

popular
Motorcyclist dies in crash live on TV while trying to escape police
What Meat Loaf actually meant when he sang 'I won't do that'
The JOE Friday Pub Quiz: Week 278
AFTV regular 'Mr DT' releases statement after being given three-year jail sentence
Brit doctor visiting US killed by stray bullet while lying in bed
'I resent my mum for not switching me back after baby mix up at hospital'
Daniil Medvedev booed mercilessly by Australian Open crowd during honest interview
You may also like
Sport
UFC London: How to get tickets for UFC Fight Night
News
Wildlife returns to the Thames 60 years after it was declared biologically dead
News
Rape suspect, 13, bitten by dog after owner stops attack in a park
News
Sadiq Khan declares 'major incident' in London as Omicron cases surge
News
Four children killed in London house blaze after 60 firefighters battled the flames
Next Page