Scientists reveal the first photo of a black hole ever taken

Astronomers have released the first-ever image of a black hole taken by humans.

The photo - taken by the Event Horizon Telescope programme - shows a black hole in a distant galaxy 500 million trillion km away, that measures 40 billion km across. That is three million times bigger than the Earth. Feel small yet?

It is also thought to be 6.5 billion times the mass of the Sun.

The image was revealed at a press conference n Washington on Wednesday afternoon.

According to the National Science Foundation,

Here it is. Just gaze into its awesome depth. 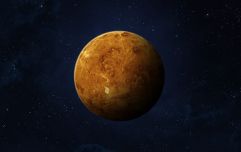 END_OF_DOCUMENT_TOKEN_TO_BE_REPLACED

A black hole is a body of mass with such a strong gravitational pull that nothing, not even particles or light itself could escape. Which would make photographing it pretty difficult.

"Black holes are objects so massive and so compact that light cannot escape," says Shep Doeleman, director at the Event Horizon Telescope programme and senior research fellow at Smithsonian Astrophysical Observatory. "We think they exist throughout the universe, but we have never seen one."

Here's an explanation from NASA, who are infinitely more qualified to explain it than we are

Hearing about #BlackHoles this morning? Here's a refresher on what a black hole IS. 🤔 It's a place where a large amount of mass has been squeezed into a tiny space. The gravity is so strong that not even light can escape from a black hole. Learn more: https://t.co/lkbaYWv5cz pic.twitter.com/RVuuxpaJPG


popular
Newcastle United sign bricklayer mate of Allan Saint-Maximin... no, really
Conor McGregor pays tribute as Khabib retirement blows division wide open
QUIZ: Name all 50 of these 2000s Champions League players
You'll have to be an old-school fan to get 20/20 in this 1990s footballers quiz
Can you name every top European football club that begins with 'A'?
Fans rage as sad-looking Donny van de Beek watches on from the stand again
QUIZ: Match The Simpsons quote to the character who said it - Part 2

You may also like
Fitness & Health
This is how NASA astronauts work out while in space
News
Japanese space agency releases incredible new images after landing on asteroid
Life
NASA Rover shares incredible 360 degree ‘selfie’ from the surface of Mars
News
The moon will turn red on Friday, during the longest lunar eclipse this century
Tech
This video proves that fidget spinners are actually extremely cool if you take them into space
Next Page