An investigative reporter shocked viewers of ITV's This Morningshow today by sharing his theory that Madeleine McCann may have wandered away on the night she disappeared.

Madeleine vanished from her bedroom at a Praia de Luz resort in the Algarve on May 3, 2007. Ten years and thousands of 'sightings' later, police are no closer to finding the child.

END_OF_DOCUMENT_TOKEN_TO_BE_REPLACED

Speaking to This Morning hosts Holly Willoughby and Phillip Schofield about his thoughts on the case, former police officer Mark Williams-Thomas says he believes the three-year-old could potentially have woken up and set out in search of her mum and dad Kate and Gerry McCann, who were dining in a tapas restaurant nearby.

'On that morning of Madeline's disappearance, we do know she went to [her parents] Gerry and Kate and said: 'Where were you last night?' said Williams-Thomas.

'Because we know the twins did wake up on days prior to her disappearance.

'And I think as a result of that, Madeline was clearly aware they were in the tapas bar that was in the resort.

'Now the interesting element in that is in order to get to the tapas bar you had to actually come out of the premises, walk on a public road to go back in again.

'And that raises a concern I have in regards to Madeleine I believe woke up in the middle of the night, she went looking for Gerry and Kate and she left the apartment and went out.

'Because we know the patio door at the back was insecure.' 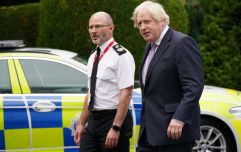 END_OF_DOCUMENT_TOKEN_TO_BE_REPLACED

Ending the segment, Phillip told Mark: "Legally we have to leave it there."

The McCanns' spokesman Clarence Mitchell described the theory as "pure speculation", adding "Kate and Gerry will not be dignifying it with any sort of comment whatsoever.”

Earlier this year, Detective Chief Superintendent Mick Duthie of Scotland Yard's Homicide and Major Crime Command spoke out to say that, despite the team being cut from 30 people to just four, there is "always a possibility" Madeleine will be returned to her parents Gerry and Kate.

popular
Conor McGregor deletes disgusting tweet about Khabib's dead father
Man who claims he’s Charles and Camilla’s child is now using his son as ‘proof’
New video of Wayne Rooney on night of ‘stitch up’ pics emerges
Men should ejaculate at least 21 times a month, according to study
Eddie Hall's monstrous 500kg deadlift had some horrific-sounding consequences
Police find 48TB of 'mostly adult' material in Shilpa Shetty's home after husband's arrest
Filipino Olympic weightlifter will be given $660,000 and 2 houses for winning country's first gold
You may also like
News
Olympic Kayaker Nathan Baggaley sentenced to 25 years in prison
Life
Couple sued for six figure sum after leaving negative online reviews
Football
Ryan Giggs accused of kicking ex in back and throwing her naked out of hotel room
Sport
Italian restaurant smashed up by 'mindless idiots' after Euro 2020 final
News
Facebook and Twitter provide police with details of racists who abused England footballers
Next Page