Vladimir Putin takes the next step towards becoming a full-blown dictator, as he passes a new law that could keep him in power for another 16 years.

Russian politics are some of the most corrupt in the modern world and Vladimir Putin has been running the shitshow for more than 20 years now. Putin succeeded Boris Yeltsin in 2000 and it seems he has no intention of stepping down or allowing for anyone else to be voted in for some time. 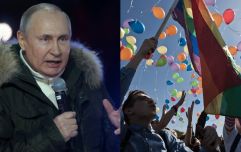 END_OF_DOCUMENT_TOKEN_TO_BE_REPLACED

His most recent law, which not only outlaws same-sex marriage but makes him free from criminal prosecution (no, seriously), also allows him to run in the next two elections. This means he could be in power until 2036: a further decade and a half, at least - although the 68-year-old would likely die in the seat of power if possible.

If he succeeds in remaining in office until then - and he will - this will see him surpass Joseph Stalin as the longest-serving rule in Russian history, Soviet or otherwise (29 years). There's a reason you see the same names like Stalin, Mussolini, Mao alongside each other.

How is this possible? Well, despite actually limiting candidates to two presidential terms in their lifetime - outlawing the shuffling between the presidency and prime minister, which he deployed early on - it conveniently doesn't count terms already served. Essentially, with likely only two terms left in him, he's wiping the slate clean.

These kinds of despotic tactics are no surprise: he's been doing them his entire political career, certainly as the President, at least. He's done everything from suspending elections and co-opting upcoming politicians (allied and opposition), to controlling the media and having his rivals poisoned.

Few people in the world exercise the level of blatant despotism so freely. He's happy to lie on the world stage in the blink of an eye - don't forget we're talking about a former member of the KGB and a man who wants people to believe he rides bears with no shirt on. His concepts surrounding truth have always been flexible, to say the least.

Of course, there was immediate backlash against the bill when it was first proposed back July 2020, with protests breaking out in Moscow and St. Petersburg, but it didn't matter: 78% of voters somehow approved of the bill. Either this fellow is a lot more popular than we realise or he's not the most honest bloke in the world.

Keep in mind, this is the same man accused of interfering with the 2016 US election that saw Donald Trump - another would-be dictator - come to power.

popular
Man faces three years in jail in Dubai for legally smoking marijuana in his own country
A definitive ranking of every swear word from worst to best
Cop who pepper sprayed Black US army officer at traffic stop fired
Comedian learns Prince Philip died while mocking him onstage
Prince Philip gets final wish after asking Queen to 'stick me in the back of a Land Rover'
Why John Corbett probably isn't Jo Davidson's mystery relative in Line of Duty
The hardest Marvel Cinematic Universe quiz you'll ever take
You may also like
News
EU leaders warm to Russia's Sputnik V vaccine
Health
In Russia, several cases of bird flu have been found in humans
Sport
Spartak Moscow troll Celtic over controversial trip to Dubai
News
Russia admits coronavirus death toll is three times higher than official figures
Sport
Russia banned from Qatar World Cup and Olympics after appeal
Next Page