The UK's largest union has called on the public to take part in a protest clap at the government's proposal to increase NHS staff wages by a mere 1% for workers in England. 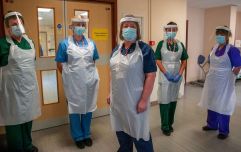 Frontline health and social care visas extended for one year

END_OF_DOCUMENT_TOKEN_TO_BE_REPLACED

After the challenges faced by more than a million health service workers over the course of the coronavirus pandemic, the move to offer only a slight pay increase has been widely criticised, despite health minister Nadine Dorries claiming the slight increase was all the government could afford.

In response, Unison has announced plans to hold a mass slow hand clap next Thursday (March 11), asking members of the public to take to their doorsteps at 8pm in a show of support for NHS workers.

"Give the chancellor a slow hand clap for his miserly 1%," said Unison general secretary, Christina McAnea.

"Times may be tough but this deal is below-inflation and derisory. It's like the worst of austerity is back.

"NHS staff have worked throughout the darkest days in health service history. They were expecting a fair increase that reflects their exceptional efforts.

"Nurses, midwives, porters, cleaners and other health workers are upset, hurt and angry.

"There were 100,000 vacancies even before Covid hit. Now the health service will be losing staff quicker than they can recruit new ones."

The move by Unison comes as The Royal College of Nursing, which represents 450,000 health care professionals, plans potential strikes in response to the proposal.

popular
PGMOL issue explanation after Cavani goal disallowed due to McTominay 'foul'
Jose Mourinho launches attack on Solskjaer in response to "conning" remark
BBC and ITV viewing figures plummeted during blanket coverage of Prince Philip
A definitive ranking of every swear word from worst to best
Eminem's 'Fack' has gone viral and people are just realising how messed up the lyrics are
The JOE Friday Pub Quiz: Week 238
These are the only 6 ways you can ever leave the pub
You may also like
News
Banksy's Covid painting for NHS charity sells for £14.4m
News
US health insurance company takes over 37 GP practices in London
News
Chemo-free leukaemia treatment given green light by NHS
News
Everyone aged 50 or over can now book a coronavirus vaccination
News
Rishi Sunak says one per cent pay rise for NHS staff is “fair”
Next Page