Wait for the tabloids to hear about this

You might have heard, Prince Harry and Meghan Markle are stepping away from the royal family. The couple announced their intentions to step back from royal duties in January 2020, which was greeted with a measured and understanding response from the British press. 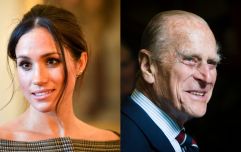 END_OF_DOCUMENT_TOKEN_TO_BE_REPLACED

In April last year they officially stepped down as senior members of the royal family, before giving up a range of titles and privileges as they relocated from London to California.

More recently, the couple confirmed what we already knew - that they would not be returning to their royal duties. Truly baffling, given the charm offensive from so much of the press here, in trying to bring them back on board.

Despite the widespread outrage at their very understandable decision from royalists nationwide, the couple did actually have support from within the royal family, it turns out.

Princess Anne - Prince Charles' sister and Harry's Aunt - spoke to Vanity Fair last year about Harry and Meghan's withdrawal from royal life, and was broadly supportive of their decision, saying it would make life 'easier' for them.

“I think it was probably easier for them, and I think most people would argue that there are downsides to having titles,” said Anne.

“So I think that was probably the right thing to do."

Anne has a record for shunning some aspects of royal life, of course.

She famously rejected HRH titles for her children, Peter Phillips and Zara Tindall.

You don't hear much outrage about that anymore though, do you? I wonder why. What could be different about Meghan that makes people so much more judgemental of her?

I can't quite put my finger on it.