Pride in the sky

This year's Pride festivities have fallen on the 50th anniversary of the Stonewall riots, when spontaneous and violent demonstrations erupted from members of New York's gay community against a police raid in the Stonewall Inn in Greenwich Village on the morning of June 28, 1969. 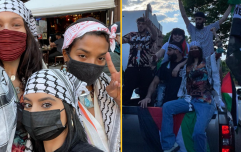 END_OF_DOCUMENT_TOKEN_TO_BE_REPLACED

The riots, which were also directed at mistreatment of the LGBT community by the city's police force, lasted two days, and is considered the seminal moment for the gay liberation movement in the United States.

Ahead of New York Pride, JOE travelled on a Virgin Atlantic plane to the city on a Pride Flight with members of the LGBT community.

There we spoke to people about the progress of the last 50 years, and the hard work that lies ahead.

This is the wildest party to ever take place at 38,000 feet.

We joined the #PrideFlight to New York to mark 50 years since the Stonewall Rebellion. pic.twitter.com/8wgUXBs7bT