The incident has been described as 'despicable' by the police force

A police officer in Dorset has tested positive for Covid-19 after being spat at by a suspect while on duty.

According to a report in the Dorset Echo, Dorset Police had reported 32 cases of being spat at from February to November 2020, up from 24 on the previous year.

BBC reported Anna Harvey, chairwoman of Dorset Police Federation, as saying that offenders are "using Covid as a weapon". She also confirmed that the usually fit and healthy officer was "really struggling" with Covid-19.

Chief Constable James Vaughan said: "Our officers, along with our emergency services colleagues, have remained on the frontline throughout the Covid-19 pandemic, engaging with our communities, protecting the vulnerable and tackling crime.

"It is not acceptable that our officers come into work and face the prospect of being assaulted. For people to be spitting at or biting them is despicable in any circumstances, but particularly in light of the public health emergency we are facing. Not only do these assaults put our officers in danger but also their families.

"We will continue to deal swiftly and robustly with any offences of this nature and ensure offenders are brought before the court to face justice. 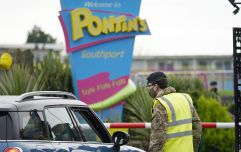 END_OF_DOCUMENT_TOKEN_TO_BE_REPLACED

"We will also do all we can to protect our officers and ensure those who are subjected to these abhorrent attacks are supported within the force."

A spokeswoman for Dorset Police said officers were called to an address early on the morning of January 6th after hearing reports that a man had been stopping traffic.

"He was arrested and during the arrest it was reported that the man spat at an officer," she said.

"A 41-year-old man of no fixed abode has been charged with assault by beating of an emergency worker and being drunk and disorderly in a public place and is due to appear at Poole Magistrates’ Court on Tuesday 23rd, February 2021."

popular
A definitive ranking of every swear word from worst to best
Chris Hemsworth criticised for attending maskless party on social media
Ant Middleton dropped by Channel 4, will no longer present SAS: Who Dares Wins
Popstar Never Stop Never Stopping is now on Netflix, and you need to watch it right now
PlayStation and Xbox users will now be able to play against each other online
Pontins used list of Irish surnames to keep Traveller families out of parks
Here's how to see who's been taking screenshots of your Instagram Stories
You may also like
News
Police no longer breaking up outdoor groups as they slam 'unmanageable' guidelines
Sport
Boris Johnson volunteers to host more Euro 2021 games, hints at World Cup bid
News
Prince Philip transferred to new hospital as he continues to fight infection and heart condition
Coronavirus
Fears Brazil variant of Covid-19 could delay lifting of lockdown
News
Prince Harry: 'British press were destroying my mental health'
Next Page