Sgt. Jonathan Mattingly, one of the police officers who was involved in the fatal shooting 0f Breonna Taylor in a 'no-knock' raid in March last year, is writing a book about the incident. 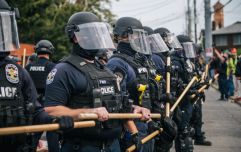 END_OF_DOCUMENT_TOKEN_TO_BE_REPLACED

Mattingly was part of a raid on Taylor and her boyfriend Kenneth Walker's flat, along with detectives Brett Hankison and Myles Cosgrove, when Walker shot Mattingly in self-defence, unaware that he was a police officer. The three officers then opened fire, killing Taylor in the process.

Whilst Cosgrove and Hankison were subsequently fired from the Louisville Metro Police Department though, Mattingly was not punished at all and was cleared of any police violations.

Now he's decided to write a book about the night in question and the fallout as a result of Taylor's death.

Entitled 'The Fight For Truth: The Inside Story Behind the Breonna Taylor Tragedy', the book was originally meant to be distributed by publishing company Simon & Schuster. However they have now announced that they will not be involved in the book's publication, which will now be published by Tennessee-based Post Hill press, according to the Louisville Courier-Journal.

As the Daily Mail reports, Simon & Schuster released a statement saying: 'Like much of the American public, earlier today Simon & Schuster learned of plans by distribution client Post Hill Press to publish a book by Jonathan Mattingly. We have subsequently decided not be involved in the distribution of this book.’

Unsurprisingly, the news of Mattingly's book has been widely criticised and met with bemusement by many as to how one of the officers involved in Taylor's death will end up profiting from the tragedy. END_OF_DOCUMENT_TOKEN_TO_BE_REPLACED

Speaking in a previous interview though, Mattingly said: ‘This had nothing to do with race. Nothing at all… because this is not relatable to George Floyd. This is nothing like that. It’s not Ahmaud Arbery. It’s nothing like it. These are two totally different types of incidences. It’s not a race thing like people wanna try to make it to be. It’s not.’

He added: ‘This is not us going, hunting somebody down. This is not kneeling on a neck. It’s nothing like that.’

Along with the fact that Mattingly believes Taylor's death had "nothing at all" to do with race, and that he's writing a book about it, he also sued Walker in October 2020 for being shot by him. Just in case you were in any doubt about this guy and his moral compass.

popular
Eddie Hearn: Billy Joe Saunders will be out for a 'long, long time' after injuring eye
This Billy Joe Saunders fan is probably regretting his choice of tattoo
The JOE Friday Pub Quiz: Week 242
Piers Morgan hits out at decision to replace him with Alastair Campbell on Good Morning Britain
Andy Burnham says 'Labour should get in touch if they need me' after election result
A definitive ranking of every swear word from worst to best
The hardest Marvel Cinematic Universe quiz you'll ever take
You may also like
Sport
Lewis Hamilton wears Breonna Taylor t-shirt after Tuscan GP win
News
NASA discovers strange radio signal emitting from Venus
Life
Melting glacier reveals cave full of forgotten WW1 artefacts
News
Chocolate orange Yorkie bars are launching in the UK next week
News
Down's syndrome abortion case heads to High Court
Next Page