Police officers have had their annual leave and rest days cancelled as climate change protests organised by Extinction Rebellion enter their fifth day. 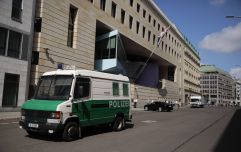 END_OF_DOCUMENT_TOKEN_TO_BE_REPLACED

The group intends to target Heathrow airport on Good Friday, as the UK's busiest airport enters the holiday period. Some 1,300 flights run out of Heathrow every day.

More than 480 arrests have been made in London at climate change protests this week.

A protester at the Extinction Rebellion demonstration in Oxford Circus sounds a conch (Credit: Leon Neal)

END_OF_DOCUMENT_TOKEN_TO_BE_REPLACED

She said: "The fact it's gone on for the number of days it has does mean it's increasing in intensity - of course the disruption that Londoners have faced has continued over those days.

"We have had information that the protesters intend to target Heathrow Airport. We want to make it very clear that we are aware of that - it's been made very obvious in social media."

"Protesters can expect a robust police response. We are determined to keep the airport operating."

There are strong plans in place that will enable us to deploy a significant number of officers to Heathrow and take firm action against any protestors seeking to cause disruption #ExtinctionRebellion https://t.co/jLnAcMNt6h

A Scotland Yard spokesperson said: "Throughout the course of today, Thursday, 18 April, we will have had more than 1,000 officers on the streets policing the demonstrations.

"This is putting a strain on the Met and we have now asked officers on the boroughs to work 12-hour shifts; we have cancelled rest days and our Violent Crime Task Force (VCTF) have had their leave cancelled.

"This allows us to free up significant numbers of officers whilst responding to local policing. We would also like to reassure people that we have ring-fenced the VCTF so we retain the capacity to deal with any unrelated violent incidents.

"However, the protesters need to understand that their demonstration is meaning officers are being diverted away from their core local duties that help keep London safe and that this will have implications in the weeks and months beyond this protest as officers take back leave and the cost of overtime."

Mayor of London Sadiq Khan said: "I'm extremely concerned by reports that climate protesters are planning to disrupt Heathrow Airport tomorrow. This is extremely dangerous, illegal and is putting an unacceptable toll on our police force and our city.

"I support the democratic right to peaceful protest and agree that governments need to do more to tackle climate change, but these protests are now putting Londoners' safety at risk.

"More than 1,000 police officers have been responding to the protests across London this week and more than 460 people have been arrested. The operation is having a significant impact on the police, with rest days and leave being cancelled for officers. The Met have requested mutual aid support from other police forces to support their operation at Heathrow.

"Our hard-working police officers have my full backing in their efforts to keep Londoners safe and to keep our city running, but I am now very concerned about the impact the protests will have on our ability to tackle issues like violent crime if they continue any longer.

"I urge everyone to co-operate with the police and comply with their instructions by attending Marble Arch as part of the legal protest - Marble Arch is the designated place that anyone wanting to protest should attend. If protesters don't, and break the law, the police will have no choice but to make arrests. "

popular
Brit on holiday beaten with a brick by gang before being thrown in the sea unconscious
The longest walkable distance on Earth which no one is known to have completed
Dad who ran off with Ukrainian refugee says couple are doing 'brilliantly' - but he can't see his kids
Blood-Smeared toddler now orphan after Highland Park shooting
Fears surging covid cases could ruin summer holidays with return of tests and rules
Man who refused to work as he was 'mourning' after US abortion decision gets fired
Men with ‘very large penises’ wanted for new documentary
You may also like
News
Sarah Everard killer Wayne Couzens faces four new charges
News
Met Police apologises for strip-searching black schoolgirl
News
Westminster, Waterloo and Hungerford bridges closed as police check 'unattended item'
News
Three quarters of voters say Boris Johnson should quit if fined by police
News
Met police to review leaked video of Downing Street aides joking about Christmas party
Next Page