"To those who warned this would happen, you’ve been proven right."

Piers Morgan had admitted those who warned of that Donald Trump posed a threat to democracy have been "proven right", following the violence that occurred at the US Capitol last week.

Speaking on Good Morning Britain Morgan's co-host Susanna Reid asked him whether recent events have made him think twice about the support he has shown Trump over the years, which includes gifting him an Arsenal shirt during an interview.

"No question," Morgan responded. "I never thought he would be capable of this."

"Even though people gave cast dispersions on his character, thought he was a pretty despicable human being, the things he has said...," Reid responded.

Morgan responded affirmatively, before saying: "He has played down to the very worst expectations predictions of his worst critics."

He added: "And to everyone who gave him the benefit of the doubt, including me for a long time - until the pandemic really hit hard in March, April, when I could see the way he was going, and I then began to attack him, which I've done all year last year...

"But there's no doubt, I never ever imagined the person I'd known for 15 years would be capable of inciting a mob to attack the Capitol in America and attack democracy itself. 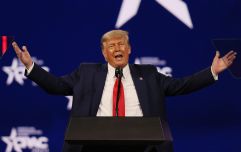 END_OF_DOCUMENT_TOKEN_TO_BE_REPLACED

"He didn't just cross a ling, he trampled all over that line and he's now a threat to American democracy.

"To those who warned this would happen with Trump, you’ve been proven right. It's a sobering moment.

A US Capitol Police officer lies face down as a baying mob of Trump supporters beats him after dragging him 50 yards through a frenzied crowd screaming abuse.
These people aren’t ’patriots’, they’re murderous traitors. pic.twitter.com/wSAy12Vsvc

popular
Chris Hemsworth criticised for attending maskless party on social media
A definitive ranking of every swear word from worst to best
Popstar Never Stop Never Stopping is now on Netflix, and you need to watch it right now
Ant Middleton dropped by Channel 4, will no longer present SAS: Who Dares Wins
PlayStation and Xbox users will now be able to play against each other online
The definitive ranking all 151 original Pokémon from worst to best
One of the world's strongest men says 'you shouldn't do deadlifts'
You may also like
Politics
Donald Trump and Rudy Giuliani to be sued over US Capitol riots
Politics
Trump left office with 'no stockpile' of vaccines and no Covid-19 strategy, claims Kamala Harris
Politics
President Biden scraps funding for Trump's border wall with Mexico
News
New footage from Capitol Hill riots shows rioters chanting "Hang Mike Pence"
News
Film to be made of infamous Four Seasons Total Landscaping Trump press conference
Next Page