The petition calling for the government to revoke Article 50 and remain in the EU has reached a staggering five million signatures. In the time it took me to write the headline to this piece it gained about 5,000 signatures and will no doubt gain another few thousand as I write this.

This comes just a day after a reported one million people took to the streets of London in peaceful protest against Brexit, asking for a 'People's Vote', aka a second referendum.


It is extremely unlikely that a second vote on leaving the EU will be held, there simply isn't enough support for it in parliament, but remainers are making sure that their voices are being heard. 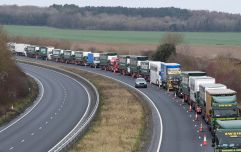 Brexit: Lorries will need permit to enter Kent from January

END_OF_DOCUMENT_TOKEN_TO_BE_REPLACED

Prime minister Theresa May is reportedly willing to lead the country out of the EU without a deal, despite having campaigned for Remain, after her deal was rejected in the house of commons on two separate occasions. That is if she can survive long enough to do so, though, with reports claiming cabinet ministers will demand her resignation on Monday.

Her de facto deputy David Lidington is understood to be in pole position to replace May in no.10 in the short term until a leadership contest is held in the autumn.

It's all a clusterfuck, really, isn't it? Nobody is happy, not leavers, not remainers. No-one stands to benefit from a no-deal Brexit other than the mega rich. We're about to have our third different prime minister since David Cameron called the referendum. Nobody knows the actual leaving date. People are stockpiling toilet paper. We've shot ourselves in the foot and blamed the gun for being too powerful.

Anyway, at least five million people are very angry about this and have signed a petition to try to stop if from happening.