This is a disturbing coincidence.

As you are probably aware, Prince William and Kate Middleton welcomed their third child into the world this week, just a month before his brother and Meghan Markle tie the knot. Baby Louis was born on Monday, and not long afterward the proud parents were photographed with him outside private maternity ward the Lindo Wing.

Of course, it’s a delightful photo of two proud parents. But people have spotted something familiar about what Kate is wearing. Something potentially rather disturbing.

Anyone else notice Kate's dress is similar to the Rosemary's Baby dress? pic.twitter.com/8f8EeTD0RP

Kate wearing the same frock as Rosemary did in "Rosemary's Baby"...hmmm should we be a little bit concerned..LOL... pic.twitter.com/YqSouVnecB

Someone shared on my FB page. #royalbaby / Rosemary's baby, one and the same... pic.twitter.com/3Sk8vHrVda 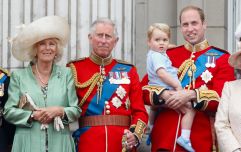 END_OF_DOCUMENT_TOKEN_TO_BE_REPLACED

Yes, Kate seems to be dressed exactly the same as Mia Farrow in the Roman Polanski’s classic 1968 horror Rosemary’s Baby. If you’ve never seen Rosemary’s Baby – well you need to see it ASAP as it’s one of the best horror movies ever made. But to fill you in, it’s about a young pregnant woman (Farrow), who become convinced that she is actually carrying the son of Satan in her womb. To say any more would spoil it, but needless to say it does end well.

Which is should go far enough to explain why some people are so freaked out by Kate’s choice of dress. Surely someone should have pointed it out to her….