Last year, Sir Philip Rutnam, the senior civil servant at the Home Office, dramatically resigned on national television claiming he was being bullied by Priti Patel.

END_OF_DOCUMENT_TOKEN_TO_BE_REPLACED

Fighting back tears, he said he’d been victim of a “vicious and orchestrated” campaign after challenging Patel’s behaviour.

In his allegations, he claimed Patel was guilty of “shouting and swearing” at staff and “belittling people".

The accusations are serious, and are in blatant violation of ministerial code.

Patel has broken the ministerial code in the past when she flew to Israel and met Israeli government officials without permission.

Rutnam’s employment tribunal on the bullying accusations was due to be heard in September - but it seems Patel has scrambled to stop it getting that far.

Government sources close to the matter have claimed the payout is a three figure sum, totalling over £370,000.

But who’s paying for this?

END_OF_DOCUMENT_TOKEN_TO_BE_REPLACED

Yep, you guessed it: we are.

A Home Office spokesman said Patel and Rutnam “jointly concluded that it is in both parties’ best interest to reach a settlement at this stage.” 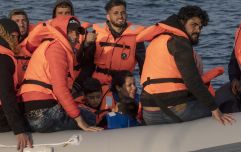 END_OF_DOCUMENT_TOKEN_TO_BE_REPLACED

But, given we’re paying for it - is it in the taxpayer’s best interests?

Unsurprisingly, the Opposition have had a lot to say on the matter.

Labour MP and Shadow Home Secretary, Nick Thomas-Symonds, has written to Patel asking exactly how much the British tax payer are having to fork out for her bad behaviour.

In a letter to Patel, Thomas-Symonds said: “Taxpayers will be appalled at having to pick up the bill for the home secretary’s unacceptable behaviour.”

He also added it raises questions about the behaviour at the most senior echelons of government.

“This whole episode continues to raise serious questions about standards of behaviour, responsibility, and leadership at the highest level of government," he added.

The timing of these revelations will be particularly painful for NHS staff - who have been told they will only receive a one per cent pay rise this year.