'She didn't break down publicly over the victims of Windrush'

Owen Jones has said he has 'less than no sympathy' for departing prime minister Theresa May following her tearful announcement that she will step down on June 7.

May fought back the tears as she concluded her speech outside number 10, where one of her equally repugnant colleagues will take over next month.

She has received a lot of sympathy from people of many different political leanings, but Owen Jones has no time for the notion that one should feel bad for her on a 'human level', citing her lack of sympathy for the victims of the Windrush scandal among other failures of her premiership.

Pushed on his stance by Sky News' Adam Boulton, Jones said: "I have less than no sympathy for her."

"She didn't publicly break down publicly over the victims of Windrush, who, because of her policies, were driven from their homes, denied medical care, and even kicked out the country.

"She didn't cry publicly over the dozens of working class people who burned to death in Grenfell Tower. She didn't weep publicly over those who've had their benefits stripped from them, those driven to food banks, because of her policies. The victims of universal credit.


"I think our media can often express much more sympathy for the powerful - in her case she will lead a no doubt comfortable ad affluent life to her very end, rather than the victims of their policies, who I'm afraid have been driven into misery, insecurity and turmoil as a direct result.

Theresa May didn't publicly break down over Windrush, or Grenfell, or disabled people having their benefits cut, or children driven into poverty.

In the end, she only publicly shed a tear over her own career. pic.twitter.com/gyHOG7xlg6 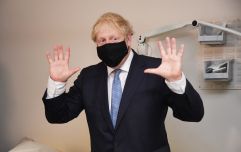 END_OF_DOCUMENT_TOKEN_TO_BE_REPLACED

"Can't you just respond on a human level?" Boulton asked.

"I have responded on a human level," Jones explained.

"I've spoken about the humanity of those who have suffered as a consequence of her policies and I wish the news would give far more space to them rather than spending time discussing the prime minister crying because she can no longer hold the most powerful job in the country."