A spokesman said that fans should be "respectful."

Number 10 has refused to condemn football fans who boo players taking the knee before kick off in matches at the European Championships. 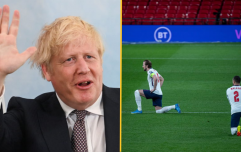 END_OF_DOCUMENT_TOKEN_TO_BE_REPLACED

However a spokesman for Prime Minister Boris Johnson said that the PM "supports individuals' right to protest" by taking the knee in order to "make their feelings known about injustices."

He fell short of explicitly condemning these fans though.

Ahead of both of England's warm-up matches against Austria and Romania in Middlesbrough, fans booed as players took the knee before kick-off.

The players and Gareth Southgate explained after the Austria game why they decide to take the knee before kick-off and why they would continue to do it, explaining that it was nothing to do with Marxist values, wanting to defund the police or aiming to destroy the nuclear family.

Just in case that needed clarifying.

After the Romania game, Marcus Rashford said that the boos would not stop them kneeling before games.

The Mirror reports that when asked whether the PM would condemn the booing, the Prime Minister’s Official spokesman said: "[The PM] would want all England fans to be respectful in any football match, and as I've said he respects the right of those who want to peacefully protest in this way." 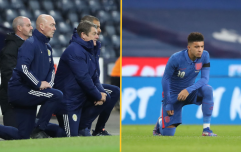 END_OF_DOCUMENT_TOKEN_TO_BE_REPLACED

Of course, Johnson has previously said that he would not take the knee himself, because he does not believe in "gestures."

The spokesman continued: "The PM has spoken on this matter before.

"On taking the knee specifically the PM is more focused on actions rather than gestures.

"We've taken action on with things like the Commission on Racial and Ethnic Disparities and that's what he's focused on delivering."

Asked for the PM’s message to Gareth Southgate ahead of the tournament, the spokesman said: "We're hugely excited at the start of the Euros and want the whole country backing the team to succeed."