The next time you hear an anti-Muslim comment, this is how to shut it down

When a caller to his LBC show suggested all Muslims were complicit in terrorism, James O'Brien had the perfect response.

The next time you're met with a blanket statement linking all Muslims with acts of terrorism, you might do a quick Google search and find this clip.

LBC and JOE Unfiltered host James O'Brien had a caller, Michael, on his show on Thursday who claimed that all Muslims are complicit in acts of terrorism, and how society should "weed out the bad apples".

O'Brien's response was as reasoned as it was powerful, and perfectly distilled the opinions of those who believe that terrorists alone - rather than their ethnicity - are responsible for acts of terrorism.

This caller said all Muslims are complicit in terrorism. @mrjamesob's response was so powerful. pic.twitter.com/SMeqd12LAc

"The best way to do that is by taking loads and loads of innocent Muslims and telling them that they're somehow responsible for atrocities and carnage. They're no more responsible for it than you are.


"But you're not comfortable with THAT side of the argument, because you want people to be more terrorised and so do the terrorists, mate. 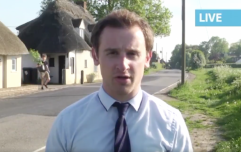 END_OF_DOCUMENT_TOKEN_TO_BE_REPLACED

"In terms of that question, do you want people to be more or less terrorised, your answer is...?" asked O'Brien.

"Well, that's your choice. You can choose right now to be less terrorised," replied O'Brien. "The best way to start would be not to claim that all Muslims are all somehow complicit in acts of terror. And then immediately you'd be confining your anger and your fear to people to people who commit acts of terror and not people who sell you milk in the morning, do your accounts or drive you home at night after a skinful."

Michael then claimed it was 'a difficult subject'.

"You're making it difficult," said O'Brien. "Of course, people like Donald Trump and Islamic State love the difficulty you're having because it feeds the hatred that they're seeking to spread. You choose whether to be a tool of that hatred.


popular
A definitive ranking of every swear word from worst to best
The definitive ranking all 151 original Pokémon from worst to best
'Time traveller from 2030' passes lie detector test over future predictions
This is how much time most men need after orgasm before they're ready for another round
The JOE Friday Pub Quiz: Week 193
Here's how to recover all your deleted Facebook photos and messages
PlayStation and Xbox users will now be able to play against each other online