UK aid worker Nazanin Zaghari-Ratcliffe has been jailed for another year and is prohibited from leaving Iran for that time, according to her lawyer.

END_OF_DOCUMENT_TOKEN_TO_BE_REPLACED

The UK-Iranian national was arrested by police during a visit to Iran with her young daughter to see her parents in 2016.

She was sent to prison amid allegations of plotting to overthrow the Iranian government, despite continually denying the accusations made against her.

In March 2020, the mum-of-one was released to her parents' house due to the Covid-19 pandemic but was placed under house arrest.

Her lawyer recently said that Zaghari-Ratcliffe's electronic tag, which prevented her from going more than 300m from her home in the capital of Tehran, has been "cast off".

Now, however, an Iranian Revolutionary court has sentenced the aid worker to a one-year prison sentence, as well as prohibiting her from leaving Iran for one year.

Hojjat Kermani, Zaghari-Ratcliffe's lawyer, told Emtedad news website: "Nazanin Zaghari was sentenced to one year in prison and one year ban from leaving the country on charges of propaganda against the Islamic Republic."

The PM Boris Johnson has today told reporters that he thought Zaghari-Ratcliffe's sentencing was "wrong." 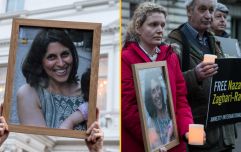 UK "to pay £400m to Iran to free Nazanin Zaghari-Ratcliffe"

END_OF_DOCUMENT_TOKEN_TO_BE_REPLACED

Johnson said: "We will have to study the detail of what the Iranian authorities are saying.

"I don't think it's right at all that Nazanin should be sentenced to any more time in jail. I think that it was wrong," as reported by Sky News.

The PM continued: "I think it's wrong that she's there in the first place and we'll be working very hard to secure her release from Iran."

popular
Here we go again - the government says book your Xmas party. What's 'Plan B'?
Matt Lucas hits back at outrage over 'offensive' Bake Off German accent
Gordon Ramsay's daughter Tilly calls out radio host for 'fat shaming' her live on air
Mum who drove into Insulate Britain in rage says 'I just gave them a nudge'
Watford staff unhappy with Ben Foster's commitment to vlogging on club time
Passengers who allegedly filmed rape of woman on train unlikely to be charged
Sainsbury's is selling pigs in blankets sushi for Christmas and the internet is divided
You may also like
Sport
Iran state TV censors Tottenham vs Man Utd broadcast because of assistant ref
Sport
Iranian footballer produces ridiculously long somersault throw
News
Is America's hegemony in the Middle East coming to an end?
Politics
Seven reasons the world doesn't need a US-Iran war right now
Sport
Carlos Queiroz emerges as candidate to become new Ireland manager
Next Page