The mother got the sandwich out to give to her child.

A vegan cafe worker has shared their story of how they had to ask a mother to leave the venue because she got out a ham sandwich. 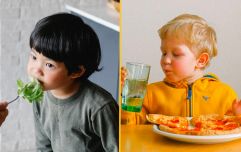 END_OF_DOCUMENT_TOKEN_TO_BE_REPLACED

The story had initially been shared by a worker from the cafe on the Reddit thread r/AmITheAsshole, in which people ask the world of Reddit whether they were the asshole in certain situations.

The thread tells of how a group of women had gone to the meat-free cafe.  As one started to feed her child a ham sandwich, the attention of the workers at the cafe was drawn.

Issues arose due to the fact that it was a meat product in a venue that hadn't served meat or dairy for years, as oppose to the fact that the mother had brought food from home into the cafe. The cafe does apparently also state that there is a no meat or fish rule on site, in order to accommodate for religious visitors or those with allergies.

The post from the worker read: "Obviously there is a general expectation on most places like this that you don't eat food not bought on the premises, but we waive it for kids and their special food, biscuits etc.

"I've seen people feeding yoghurt looking things and turned a blind eye and also never specifically examined jars of baby food to check they are vegan, generally these are in self-contained pots and the parents use their own little spoons etc.

"One day some women came in for lunch and one had a child about four years old.

"They ordered and asked for a plate for the kid's sandwich. This is already a more substantial meal than what we usually expect but whatever.

"When I take their food over I realise that the kid is eating a ham sandwich (quite obvious as the kid is ripping it up and spreading bits about etc).

"I tell the women that meat can't be eaten on the premises (this was inside) and they need to put the stuff back in the Tupperware.

"They get upset and say the kid will go hungry and I say they're welcome to order one of our vegan sandwiches or anything else.

"I say that they could have eaten another type of sandwich - even a vegetarian but not vegan sandwich would have been more acceptable- but in the interests of our other customers we cannot have ham eaten here, especially inside and especially using our plates.

"They get angrier and say they'll take their meals to go and won't be back. On the way out, they shout that I'm disgusting for depriving a child of its food.

"I can see their point, but also think they should have thought more before coming to our cafe."

It seemed like most agreed with the cafe employee as well, backing up the cafe worker and showing bemusement at the Karen-esque behavior from the mother.

One Reddit user wrote in reply: "Bringing any outside food into a restaurant is totally crass imo."

Another said: "There are a ton of other places for the child to eat a ham sandwich. If the child goes hungry, that's on the parents, not on you. NTA."

A third made the very valid point of asking why "they would even GO to a VEGAN restaurant that literally announces it to everyone and then bring the sandwich...is the rest of the family vegan or something? I’m just so confused by it."

Others described it as "totally crass" and "unacceptable" to have brought the meat product into the venue.

As the saying goes, you can't have your ham sandwich and eat it.