A new mum was left shocked when she accidentally put her baby up for sale while trying to sell her sofa after she posted a photo of the tot saying “need gone today”.

END_OF_DOCUMENT_TOKEN_TO_BE_REPLACED

Lucy Battle was trying to give away her old two-seater couch when she accidentally included a picture of her seven-month-old son Oscar on a Facebook post that soon went viral.

The 20-year-old, from Leeds, West Yorkshire, thought she had only posted pictures of the brown sofa - having just got a new one - but didn’t realise that she included little Oscar smiling in the post.

Battle was instantly inundated with comments from people inquiring about his behaviour and how he played with other children.

Mandy Lyles wrote: "Can I swap for a teenager?"

Sarah Wilkinson commented: "How's he at washing up?" 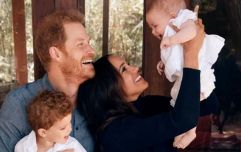 END_OF_DOCUMENT_TOKEN_TO_BE_REPLACED

And Tom Howell joked: "What's he like with other babies?"

One mum even offered a swap deal, posting: "How bout a two for one swap? Teenager 14, brother 6, and I will throw in the father for free?"

Battle was able to see the funny side - and managed to shift the sofa.

“At first I was confused as to what people were saying in the comments, then I looked at the post and the main picture was one of him," she said.

“I was so embarrassed – and I couldn’t even delete it.”

But she was happy how many people liked Oscar: "I was overwhelmed by all how much everybody wanted him. "The person that came to collect the sofa didn't make an offer for him though, they just wanted the couch."

popular
Man dies three days 'after GP sent him home and threatened to strike him from surgery list'
Peter Dinklage calls Snow White and Seven Dwarfs remake 'f*cking backwards'
Driver arrested on suspicion of murder after knifeman 'hit with car while stabbing woman'
Marcus Rashford responds after being pictured with disgraced rapper Wiley
Schoolboy loses both nipples after classroom dare involving two cans of Lynx
McDonald's launching new Big Mac with twist for first time ever in UK
Outrage after Sadio Mané allowed to play on for 10 minutes after being knocked out
You may also like
Life
'I resent my mum for not switching me back after baby mix up at hospital'
Crime
Katie Price 'should've gone to jail so our kids can learn right from wrong', says ex
News
Outrage over dad's method for making sure kids behave during Christmas
Entertainment
Susanna Reid apologises for 'insensitive' question to lesbian couple trying for baby
Life
Mum says it’s not right for parents to charge adult kids rent
Next Page