The mother of the Oxford Brookes student, Richard Okorogheye, who was sadly found dead in a lake in Epping Forest, told Sky News that her heart has "been ripped apart" after her son's death. 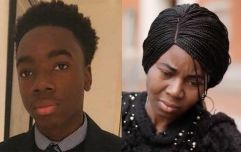 END_OF_DOCUMENT_TOKEN_TO_BE_REPLACED

Speaking to Sky News, Joel said: "At this moment of time I just want answers as how my son lost his life. I want answers. I desperately need closure."

She said that "Richard was only 19" when he died, before questioning what there is to look forward to after his death.

Evidence Joel, Richard's mother, tells Sky News what the experience of losing him has been like.

Richard's mother told Sky News that she travelled to the site where Richard's body was found in order to lay flowers.

She said: "It was a very uncomfortable place to be. I wouldn't want to be there. END_OF_DOCUMENT_TOKEN_TO_BE_REPLACED

"My son that I know cannot walk into that darkness - no torch, no light. An hour and 30 minutes from where he was last seen. He must have guts to do that." she said, before adding "he's only 19."

Okorogheye was last seen on 22 March, after telling his mother that he was going to visit a friend. He was later reported missing on 24 March.

His death is reportedly being treated as unexplained and police do not think that there was any involvement by a third-party at this stage of the investigation.

popular
Man faces three years in jail in Dubai for legally smoking marijuana in his own country
Cop who pepper sprayed Black US army officer at traffic stop fired
A definitive ranking of every swear word from worst to best
Comedian learns Prince Philip died while mocking him onstage
The definitive ranking all 151 original Pokémon from worst to best
Prince Harry issues new statement after death of Prince Philip
Prince Philip gets final wish after asking Queen to 'stick me in the back of a Land Rover'
You may also like
News
Police find body in pond in Epping Forest on search for Richard Okorogheye
News
Richard Okorogheye's mother says "every day is a nightmare" as search for 19-year-old goes on
News
Mum of missing teenager told ‘we can’t find your son if you can’t’ by police
News
UK could reach herd immunity by Monday, study claims
News
Prince Harry plans UK return for Prince Philip's funeral
Next Page