Middle-aged non-drinkers may develop a 'higher risk' of dementia, according to study

The study ran for over two decades

People who abstain from drinking alcohol in middle age may be at a heightened risk of dementia later in life, research has found.

The long-term study – which tracked the health of civil servants working in London – found that both groups of people who drank over the recommended limits and also those who have abstained from alcohol entirely were at an increased risk of contracting the disease.


Follow-up clinical examinations were taken place about every four or five years, with each wave taking two years to complete, the last series of which were conducted in 2015 and 2016. 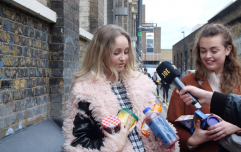 What are British people stockpiling during the coronavirus outbreak?

END_OF_DOCUMENT_TOKEN_TO_BE_REPLACED

A total of 397 cases of dementia were recorded over the 23 years in which the study took place.

Those who abstained were found to have a 45% higher risk of dementia compared with people who consumed between one and 14 units of alcohol per week.

Excessive drinkers – defined as those who consumed more than 14 units a week – were also found to be at risk, as with every seven-unit-per-week increase, there was a 17% rise in dementia risk.

14 units of alcohol per week equate to six pints of average-strength beer.

You may also like
Politics
Sadiq Khan: Will London be shut off from the rest of the UK?
Health
A message from NHS workers
Health
Inside Spain: One of the worst affected countries of the COVID-19 outbreak
Health
How to look after your mental health during the COVID-19 pandemic
Health
This is how to survive living in total isolation
Next Page