And now we know.

It was just one of the moments from Donald Trump's Inauguration that had viewers scratching their heads, and now we have (some of) the answers we were looking for. 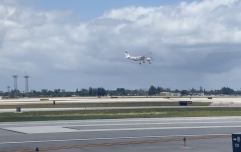 END_OF_DOCUMENT_TOKEN_TO_BE_REPLACED

Michelle Obama has finally revealed what was inside that blue Tiffany box that Melania Trump gifted her with at the Inauguration.

We’ve all seen the pictures of the former First Lady looking around for somewhere to lay the present the Trumps had given her and she's finally given some clarity into that moment.

Appearing on Ellen yesterday, Michelle was asked about the gift exchange and she said:

“There is all this protocol because it’s a state visit. And never before do you get a gift so I’m sort of like, ‘OK, what am I supposed to do with this gift?’

“Everyone cleared out so I’m thinking, ‘do we take the picture with the box?’ and then my husband came and saved the day and brought it inside.”

As for what was inside the blue box, well, Michelle revealed that it was, in fact, a picture frame.

With Tifanny frames retailing for anywhere between £700 and £1,500, we’re sure this one has earned pride of place on the Obama mantel.

popular
'I did three grams of coke during a game': Inside football's problem with Class A drugs
Patrick Vieira appears to kick fan after Everton defeat
Johnny Depp's lawyer Camille Vasquez responds to romance rumours
Man United cancel end of season awards after player requests
Amber Heard's acting coach explains exactly why she believes her tears are real
Johnny Depp's attorney Camille Vasquez revealed to be dating Brit
'Wow, hats off to her! Sick remark from Bobbi Anne McLeod's killer after she survived 12 hammer blows
You may also like
Life
Man calls police to report truck that he nicked has been stolen again
News
Worker killed after getting trapped in bread machine just days after woman died in similar accident
News
Teen shot dead by boyfriend after being mistaken for a panther in prank gone wrong
Entertainment
Rapper Kidd Creole sentenced to 16 years in prison for stabbing homeless man to death
News
Dave Chappelle attacker charged with assault with a deadly weapon
Next Page