Martin Luther King III has responded to the news that Derek Chauvin was found guilty of George Floyd's murder.

END_OF_DOCUMENT_TOKEN_TO_BE_REPLACED

The eldest son of the Martin Luther King Junior appeared on Times Radio on Sunday afternoon to share his reaction to Chauvin's guilty verdict.

The human rights leader said he immediately felt "relief" when the verdict was read out.

"None of us really unequivocally would've been able to say that, although it appeared as an open and shut case, that has not been the experience that the black and brown communities have witnessed."

He said: "When the news first came out in our home, I was in another floor ... and when the first count was read as guilty," he continued, "the doors.. began to shake and rattle."

"So in my mind, my wife and I translated that as that's probably my father and mother looking down saying 'OK we're moving in the right direction'."

He added that there was "no wind" at all and said that it was "amazing" that something like that could occur.


'When the verdict came in, one of the doors in my house began shaking. That's probably my dad and mom saying we are moving in the right direction.''@OfficialMLK3, on hearing Derek Chavin been found guilty of George Floyd's murder.@ayeshahazarika pic.twitter.com/eOi9RkJxoO 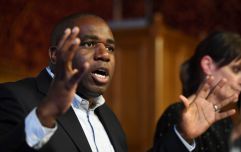 END_OF_DOCUMENT_TOKEN_TO_BE_REPLACED

Martin Luther King III said: "There's so much more work that has to be done, as the President and Vice President and President Obama stated, and so many of us throughout this community."

"But we know this is an incredible, monumental moment that could begin the process of changing law enforcement in general because they know that there is now the serious prospect that you're going to be held accountable," he said.

Following the guilty verdict which had been anticipated by President Biden and many Americans, Martin Luther King III said that the US still had work to do in terms of tackling systemic racism.


Police brutality stems from a justice system that is deeply rooted in racism. We must continue the work of uprooting the systemic racism in our country.

He said: "Police brutality stems from a justice system that is deeply rooted in racism. We must continue the work of uprooting the systemic racism in our country."