Morris and Marlboro brand think "the sooner it happens, the better it is for everyone”

Philip Morris International (PMI), the Swiss-American multinational cigarette and tobacco manufacturing company known for producing Marlboro cigarettes, has urged the UK and other countries to ban cigarette smoking within the next decade.

END_OF_DOCUMENT_TOKEN_TO_BE_REPLACED

Speaking to the Telegraph, PMI's CEO, Jacek Olczak, said "the first choice for consumers is they should quit smoking" and that tobacco cigarettes should be treated like petrol cars, which are set to be banned from 2030.

The government has a current plan to make Britain smoke-free by 2030 already and Marlboro themselves announced they would be phasing out cigarettes two years ago, but Olczak wants the same governmental support to make sure this initiative happen.

There have been several pieces of legislature proposed regarding environmental objectives and public health goals in recent months, with the halogen lightbulbs set to be banned and MPS wanting the smoking age itself to be raised to 21, just to name a few; junk food adverts are even going to be banned from 9pm in an effort to help tackle obesity. Things are starting to change.

Nevertheless, Olczak wants even more effort put into the anti-smoking cause, as his firm looks to shift towards “healthcare and wellness company”. Reinforcing PMI's commitment he added: "Give them a choice of smoke-free alternatives … with the right regulation and information it can happen 10 years from now in some countries. You can solve the problem once and forever.”

According to the World Health Organisation (WHO), smoking - including secondhand - kills around eight million people every year and although we are more aware of the detrimental effects it has on our health, at least 6.9 million adults still smoke in the UK alone.

On the other hand, many have taken issue with cigarette and tobacco companies for posing as wanting to be part of the solution to a smoke-free world, despite still trying to simultaneously sell and promote cigarettes. PMI itself was criticised for releasing a number of anti-smoking ads whilst promoting equally problematic alternatives such as 'heated tobacco'.

Heated tobacco, like vapes and e-cigarettes, have been pushed by Morris under the branding of IQOS (a stylisation of the 'I quit original smoking' slogan) as an alternative to traditional smoking on the basis that it releases nicotine without smoke and tar. 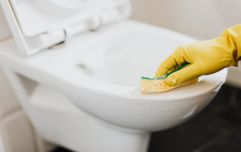 END_OF_DOCUMENT_TOKEN_TO_BE_REPLACED

However, those are not the only harmful components in cigarettes and nicotine itself is the psychoactive ingredient that is addictive and caused the smoking crisis in the first place.

If you need help to quit smoking, please visit the NHS' quit smoking website for valuable resources and lots of useful information on how to make the transition.

popular
Scientists have used a computer to predict exactly when society will collapse
Sex expert reveals how men can last longer in bed
'Time traveller from 2714' reveals when the zombie apocalypse will take place and how it begins
Disney's live action Snow White remake won't feature dwarves to avoid reinforcing stereotypes
Collapse of sports crypto giant leaves fans with worthless tokens
'I'm so beautiful my friends don't invite me to birthday parties as I'll steal the show'
Eric Bailly fails spectacularly with no-look penalty in AFCON shoot-out
You may also like
Sport
Brentford close to completing deal to sign Christian Eriksen
Environment
Ecosexuals believe we should all be having sex with Earth to save the planet
Sport
James Rodriguez thanked for saving life of Ousmane Coulibaly in social media post
Sport
Tottenham-Chelsea game paused due to medical emergency in crowd
Entertainment
Ofcom issues warning to ITV after nearly 4,000 complaints
Next Page