Marks & Spencer have apologised for the naming of darker-coloured bras after they were criticised by a customer.

Kusi Kimani from East Sussex complained to the retailer after noticing online that the darker-coloured bra was named 'tobacco', whereas the lighter-coloured products were named after sweets such as 'fudge' and cinnamon'.

Kimani told Mirror Online: "I saw it about two weeks after George Floyd's death and it was particularly raw to see at that time."

"Why not call it cocoa, caramel or chocolate - sweet dessert items? But they used tobacco. I was shocked when I saw it."

"[If it is seen by] a young girl who is already uncomfortable with the colour of her skin she will be feeling even more alienated."

"To see that 'tobacco' is for their skin tone will make them feel unwanted by society," Kimani continued. "Tobacco is referred to in society as bad, unhealthy, and highly likely to kill - ‘smoking kills’."

"This is an example of how bias is ingrained into society and only helps fuel racism, be it overt or covert, however in this instance, this is a form of covert racism."

Kimani contacted Marks & Spencer in June over the listing. 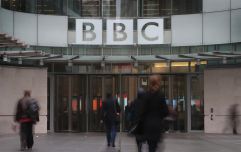 BBC defends use of N word in news report

END_OF_DOCUMENT_TOKEN_TO_BE_REPLACED

The company replied in an email dated June 10th, stating: "The names we use are taken from those on a colour palette and were never designed to match to a skin tone - I would like to assure you the choice of names is absolutely not intended to carry any negative connotations.

"We review design trends in the market each year to ensure we are offering a fashionable palette to all our customers, and we are actively reviewing our naming convention in the light of the feedback we are receiving.

"We liaise with our store colleagues on a regular basis to determine which colours we need to offer our customers and we are also working with our BAME colleague network to receive their input too."

Two months later, the bra was still listed as 'tobacco'. M&S was then approached by Mirror Online, and the colour is now described as 'Dark Auburn'.

A spokesperson for M&S responded with an apology, stating: "In June we shared our commitments to being a truly inclusive place to shop and work and were honest that we have more to do and more to learn.

"As part of this, we are reviewing our ranges, supported by our BAME network, to ensure we have lingerie items that are flattering and suitable for all customers. All of our product colour names have been taken from a design colour palette used across the industry, but we agree with Kusi."

"We are changing the name of the bra colour and are writing to Kusi to confirm that, and let her know that we’re sorry for not moving faster."