Marcus Rashford has been suggested by NHS communications experts as a possible name to be part of a campaign to encourage people to take a Coivd vaccine.

The Guardian has reported that the NHS are planning to enlist respected celebrities and "influencers" to front the campaign, amidst fears of low take-up of the vaccine.

A list of "very sensible" public figures is reportedly being drawn up by ministers and NHS England, and Machester United footballer Marcus Rashford is said to have been privately brought up by communications experts at the NHS.

"There will be a big national campaign [to drive take-up]," a source told The Guardian. "NHS England are looking for famous faces, people who are known and loved. It could be celebrities who are very sensible and have done sensible stuff during the pandemic."

Members of the royal family have also been suggested as potential faces for the campaign, but no names have been confirmed yet. 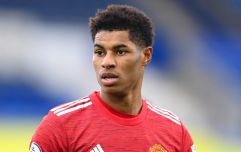 END_OF_DOCUMENT_TOKEN_TO_BE_REPLACED

Marcus Rashford has been widely praised this year for speaking out about child poverty in the UK, which has lead to two government U-turns on the issue. Over a million people signed the footballer's petition to end child food poverty, and thousands of businesses followed his lead to offer meals to disadvantaged children over the half-term holidays.

Rashford has also launched a book club with Macmillan Children's Books, with the aim of allowing all children to experience the "escapism" of reading.

According to research in The Lancet, the amount of Brits who say they would not take a vaccine has risen from 7% in March to 14% in July.

A vaccine could start being rolled out as soon as December 7th to frontline workers, with the NHS reportedly looking to recruit firefighters, airline staff and the unemployed to help administer the vaccine.