Yes, that's a lot to take in

The Take Back The City protest took place in Dublin on Saturday as housing activists marched from the city's Garden of Remembrance to O'Connell Street bridge. 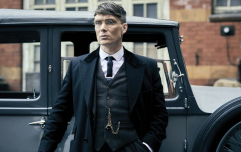 END_OF_DOCUMENT_TOKEN_TO_BE_REPLACED

They then had a sit-down protest on the bridge as part of the rally to highlight the housing shortage.

While it's thought that over 1,000 people attended the event, some of the passersby didn't appreciate what was going on, and one English man made his feelings clear.

A group of men passed by shouting at protesters telling them "get a job" (a lot people are off work on Saturday though, mate) and calling them "scroungers", before one of them threw a pigeon's head at them.

We have so many questions about the video.

Who are these men? Why are they dressed as such? And above all else, the burning question, why on earth did one of them have the head of a dead pigeon in their pocket?

Seriously, what the hell?!