The hero London needs but does not deserve

A man has conducted a citizen's arrest in Borough Market without even knocking the cherry out of his cigarette.

The man was wearing a leather jacket when he carried out the "cool" arrest.

According to the Independent the man on the floor was "trying to start fights with people."


The identity of Borough Market's gatekeeper/guardian/enforcer is unknown. His main interests appear to be smoking, being well dressed and staring into the distance. Although, the beginnings of a kata gatame head and arm hold could indicate some martial arts knowledge. 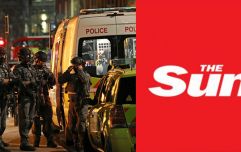 END_OF_DOCUMENT_TOKEN_TO_BE_REPLACED

Photographer Nick MacMahon captured the moment on the afternoon of May 31. He said: "He was pretty drunk, walking around with a beer in hand. Maybe 15 minutes later I see a couple men holding him to the ground outside the pub.

"They let him go and tried to make him leave the market area but he kept hassling them, trying to start a fight. They were not in the mood and just wanted him gone."

At this point Borough market's Harrison Ford "floored" the man and waited for police to arrive.